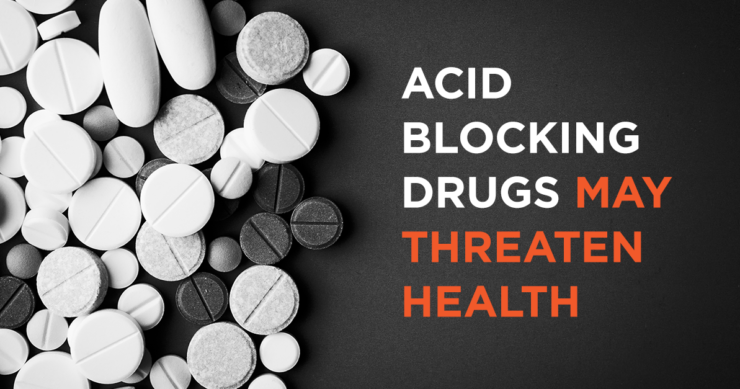 We’ve all seen the commercials. A man tries to eat a sausage sandwich, and the sausage turns away. The implication is that if he eats the sausage he’ll get “indigestion”…whatever that means. The call to action is to reach for an acid-blocking pill. Then, he can eat whatever he wants, and the world is a better place.

Generally, the reason people don’t tolerate foods has little to do with the food’s effects on stomach acid. When, like our friend above, foods aren’t tolerated, it might just mean there’s a good reason we shouldn’t be eating them in the first place.

But somehow, the idea that we are all suffering from “excess stomach acid,” has really taken hold in our society – no doubt because the fix for this condition is as easy as popping a pill.

But the overwhelming number of people taking acid blocking drugs, specifically the group called proton pump inhibitors, or PPIs, don’t have these conditions. But they do watch TV and see advertisements in magazines. Amongst healthcare practitioners, PPIs are some of the most commonly prescribed classes of drugs and include esomeprazole (Nexium), lansoprazole (Prevacid), pantoprazole (Protonix), and omeprazole (Prilosec).

Acid reducing PPIs are big business indeed. Just check out this list of the top 10 PPIs (in terms of global sales in 2013). Nexium alone toped $5.5 billion in sales.

Wven though many of these medicines are available without a prescription, we are now seeing some significant data points that should raise our concern about their usage. As an example, in June of this year, Stanford researchers called attention to the significant increase (16-21% higher) in risk for heart attack in users of PPIs. More alarming was their finding that risk of death from a cardiac was more that doubled in people taking these drugs. To be sure, this was a very powerful study, comprising an evaluation of 2.9 million individuals.

By no means does this report represent the first indication of the risk of these incredibly popular medications. As Dr. Amy Kapadia published in Primary Care Consultant, back in 2010:

Specifically, increasing evidence demonstrates that PPI therapy may be associated with the development of Clostridium difficile infections, hip fractures, community­ acquired pneumonia, vitamin B12 deficiency, and possibly immunoglobulin E–mediated allergic reactions. The implications of such adverse outcomes, along with the evidence of the inappropriate use of PPIs, underscore the need for more judicious use of this class of medications.

A lot of research has been dedicated to trying to understand mechanistically how these acid-blocking drugs increase the risk for such a wide array of health conditions, and what is being revealed is that these risks may be increased because of changes in the gut bacteria that happen when acid levels are reduced. So once again, threatening the microbiome may well pave the way for health consequences.

My purpose in writing this blog is to provide another side of the story as it relates to this incredibly popular class of medications, not to dictate to my readers what they should or shouldn’t do. So often, and for the wrong reasons, we are led to believe that taking this or that medications offers us a free ride to feeling better. Once again it is clear that there are no free rides.