Added Sugars – Not a Good Choice for Infant Nutrition

Added Sugars – Not a Good Choice for Infant Nutrition 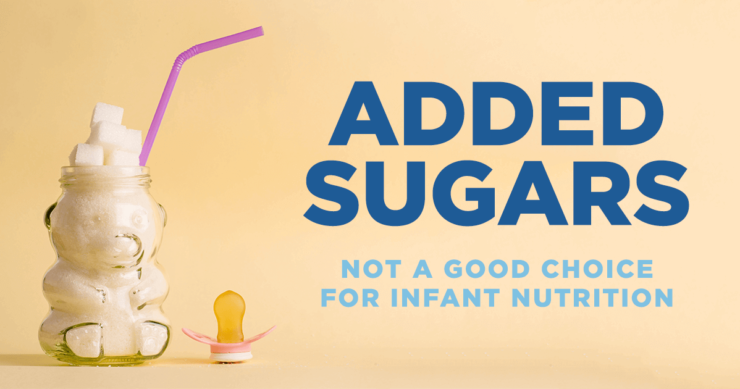 Who can forget the message of Mary Poppins telling us that “…a spoonful of sugar helps the medicine go down.” Yes, we humans certainly like our sugar. To be sure, added sugar certainly increases our desire to consume a lot more than the “medicine” described in the song. It’s concerning to consider that of the 1.2 million food products sold in America’s grocery stores, approximately 68% have added sweeteners. This represents an active attempt to hack into our primitive desire for sweet and to alter our food choices moving forward.

Even more worrisome is the fact that 60% of infants are given foods and beverages that contain added sugar. It is this very early exposure that may significantly influence food preferences for the rest of that child’s lifetime. As Robert T. Murray at the Ohio State University School of Medicine recently wrote in the Annals of Nutrition and Metabolism¹:

During the first years of life, the sweetness of sugars has a capacity to hinder or to help in laying a strong nutritional foundation for food preferences that often extend over a lifetime. Aside from supplying 4 g/kcal of energy, sugars are non-nutritive. However, sugars have a powerful attribute, sweetness, which strongly influences human food preference.

Murray goes on to review recent data from The National Health and Nutrition Examination Survey, (NHANES)² which compared two time periods, 2005 – 2008 and 2009 – 2012. The study reveals that there appears to be, over time, a fairly significant reduction in non-milk food items consumed by infants. Further, as it relates to one of the most common sources of sugar for infants, fruit juice, in comparing the two time periods fruit juice consumption declined from 13 to 6.5%.

These findings might well demonstrate the desire on the part of parents and caregivers to reduce sugar consumption, but certainly do not lend information as to their reasoning. One might assume that the reduction in sugar consumption generally, and fruit juice consumption specifically, may reflect an increase in breast-feeding. But that is not what the statistics demonstrate. In fact, in comparing the two time periods, rates of breast feeding have remained stable. Perhaps the reduction in sugar consumption by infants reflects an increased parental awareness of various sugar-related health issues.

While one can speculate as to the reasoning behind parents’ and caregivers’ decisions that ultimately manifest as a reduction in sugar consumption by infants, this decision is a good one because data relating sugar consumption in adolescents and adults, to issues like obesity, depression, and type II diabetes, is clear. And it does seem, as described in Murray’s report, that:

Parenting skills are a critical factor in shaping the toddler’s first dietary pattern, which lays a foundation for food preferences, eating habits, and future nutrition.

The American Academy of Pediatrics recommends breast-feeding, exclusively, for the first six months of life. Thereafter, foods are introduced. And when this happens, a lot of decisions have to be made. Breast-feeding is pretty much a binary decision, meaning it is either done or not done. But as it relates to the introduction of foods to an infant’s diet, so many questions arise as to making the right decisions in areas like quality and quantity.

Through the lens of how early life food exposure may influence adult preferences and decisions as they relate to food, it seems clear that choosing foods with higher levels of added sugar may well pave the way for problems later in life. So, it makes sense to be judicious and choose wisely, especially as it relates to this issue of added sugar.

Maybe Mary Poppins was right as relates to medicine, but as it relates to infant nutrition adding the spoonful of sugar is probably not going to turn out well.