ADHD Drugs Associated with a Dramatic Increased Risk for Parkinson's

ADHD Drugs Associated with a Dramatic Increased Risk for Parkinson’s 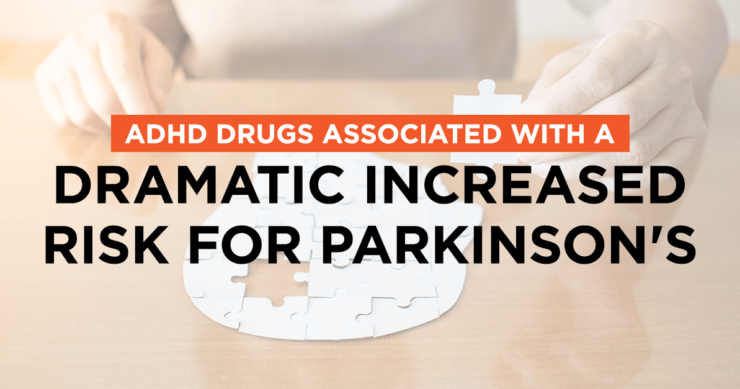 Estimates indicate that approximately 11% of school-aged children in United States have attention-deficit/ hyperactivity disorder (ADHD). Further, approximately 2/3 of these children are currently being medicated for this diagnosis. The most common medications are essentially stimulants like amphetamines or methylphenidates, including drugs like Adderall and Ritalin.

The areas of the brain that are potentially damaged or disrupted by these medications include the basal ganglia, brain structures that are involved in coordinated movement. The other area that is potentially involved is the cerebellum, which also plays a role in movement.

In a recent study published in Neuropsychopharmacology, researchers from the University of Utah attempted to determine if children with ADHD had an increased risk of Parkinson’s disease or other issues related to damage to the areas of the brain described above. Further, they wanted to determine if in fact being treated for ADHD might increase risk for Parkinson’s down the line.

The research involved the review of more than 11 million individuals and ultimately arrived at a cohort of around 32,000 individuals who had a history of being diagnosed with ADHD. These subjects were at least 20 years of age in 2011 and of them, approximate 5,000 had been treated with stimulant medications, again for ADHD. These subjects were compared to approximately 160,000 individuals in whom there was no history of ADHD.

In follow-up, the risk of movement disorder involving either the basal ganglia or cerebellum was increased a dramatic 2.4 fold in those individuals who had been previously diagnosed with ADHD. In those individuals not only diagnosed with ADHD, but who also were given stimulant medication, the risk of developing a movement disorder, like Parkinson’s disease, between the ages of 21 and 49 years was increased a dramatic 8.6 fold!

In trying to explain the possible connection, the lead author of the study, Dr. Glen Hanson, told WebMD:

the drugs used to treat ADHD apparently work because of their profound effects on the activity of these dopamine pathways. Theoretically, the treatment itself might trigger a metabolic disturbance, promoting dopamine pathway degeneration and, ultimately, Parkinson’s.

The credo, above all, do no harm, remains in full force. We know that there are acute side effects of these medications including insomnia, restlessness, nervousness, impaired appetite, mood changes, behavioral changes, and in some cases, even movement disorders. I believe it’s important to add to the list of these known acute side effects, issues that may occur further down the line that may well be as significant as this study describes. What I’m simply saying is that parents contemplating the use of ADHD medications should consider discussing the results of this study with their child’s treating physician, and think about this study when weighing whether to begin medication or not.

For more of the latest science and advice on ADHD, visit our Focus page.