Alzheimer's Drugs Are Making Your Brain and Cognitive Health Worse 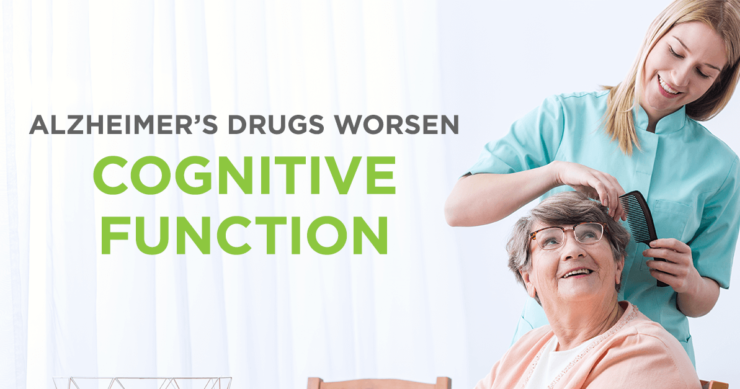 It’s becoming quite common these days to see news releases documenting the failure of yet another experimental drug for the treatment of Alzheimer’s disease. In fact, one major pharmaceutical company, Pfizer, indicated in February of this year that they were no longer going to pursue efforts to develop a drug to treat this disease, which is now reaching epidemic proportions.

That said, millions of Americans are already taking medication that is FDA approved, to “treat” their Alzheimer’s disease. Since these medications are FDA approved, one would expect that they’ve been extensively tested and proven not only safe, but effective as well.

The largest class of medications that are aggressively prescribed for Alzheimer’s patients are called cholinesterase inhibitors (ChEIs), meaning they inhibit a specific enzyme (cholinesterase) that breaks down a brain chemical called acetylcholine. Reduced levels of acetylcholine is known to be a hallmark of an Alzheimer’s brain. The logic here is that inhibiting the enzyme might allow more acetylcholine to be present in the brain, proving helpful.

The problem is that there is no convincing evidence that inhibiting this enzyme is helpful in terms of slowing down the progression of Alzheimer’s disease. Cholinesterase inhibiting drugs, like Aricept, again, are highly marketed and highly prescribed, to the tune of hundreds of millions of dollars of annual revenue.

On November 2, 2018, the American Medical Association, in their journal, JAMA Network Open, published the results of an extensive meta-analysis designed to determine the effectiveness not only of ChEIs, like Aricept, but also another medication also approved called memantine,  marketed under the name Namenda. The research evaluated 10 high-quality studies published in peer-reviewed journals and included a total of 2,714 participants.

The findings of this study not only confirmed the lack of the effectiveness of either of these drug types, used alone or combined, but actually demonstrated that the use of these medications, again, drugs like Aricept and Namenda, where shown to correlate to a faster rate of cognitive decline. Again, the very drugs that are being prescribed across our country, and indeed around the world, with the idea that they are somehow going to treat Alzheimer’s disease are actually associated with a more aggressive decline in cognitive function:

… the very drugs that are being prescribed across our country and indeed around the world with the idea that they are somehow going to treat Alzheimer’s disease are actually associated with a more aggressive decline in cognitive function.

When Alzheimer’s disease is diagnosed in a loved one people want to do absolutely everything they can to be as helpful as possible. Typically, they end up in the doctor’s office and end up feeling somewhat grateful that they’ve been given a prescription for an approved medication. But, the truth of the matter is that there is no medication that has any effect on the time course of this disease. Moreover, the medications that are prescribed actually make the patients decline more quickly.

I am a neurologist, and over the course of my career I have interfaced with countless families struggling to understand the implications of Alzheimer’s disease. Further, to be sure, as I watched my own father lose his life from this disease, I have connected with Alzheimer’s on a very personal level. If there were a medication that helped, I would’ve prescribed it for my patients and father as well.

It is beyond heart wrenching to recognize the incredible fraud that is being perpetrated across the country as it relates to Alzheimer’s disease treatment. It would be one thing if the medications simply didn’t work. But now that we have learned that these medications are actually making people worse, it’s really time that physicians change their approach and focus on the doctrine underlying our profession – above all do no harm.

For more of the latest science on Alzheimer’s disease and dementia, visit my Focus page.