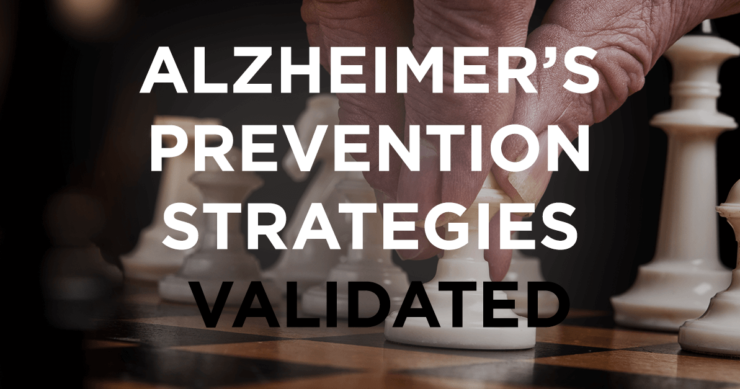 Over the past decade we have been vigorously promoting the concept of Alzheimer’s prevention. Alzheimer’s disease is devastating, not just for the patient, but for families and loved ones as well. And let me be candid: watching my father succumb to Alzheimer’s was the most emotionally challenging experience of my life. Not only that, it also served to strengthen my resolve to do whatever I can to continue to raise awareness of the science that supports the notion that our lifestyle choices do indeed play an important role in determining our risk for this disease – a disease for which there is no meaningful treatment whatsoever.

With that as a background, a study recently appeared in the prestigious Journal of Neurology, Neurosurgery and Psychiatry in which researchers performed a deep dive to determine if Alzheimer’s is indeed preventable. This landmark study clearly represents the most comprehensive attempt to explore the effects of various lifestyle choices and the conditions they create specifically in the context of Alzheimer’s risk.

The researchers looked at data from two types of studies. First, they evaluated what are called observational prospective studies. These are studies that follow a group of people over a period of time and attempt to identify relationships between variables like diet, exercise, educational level and risk for developing a specific disease. These researchers identified 243 of these studies and reviewed their findings in their report.

In addition, the authors identified and reported 153 randomized controlled trials. These are studies in which people are divided into two or more groups with some getting some form of intervention, like an exercise program, medication, or vitamin, and they are compared after a period of time with similar people who didn’t participate in the intervention.

All told, this review included nearly 45,000 individuals and produced a powerfully important set of conclusions that relate to increased Alzheimer’s risk including:

In addition, they reported that there was clear evidence that vitamin C seemed to be associated with reduced Alzheimer’s risk. And finally, and importantly, the researchers cautioned against the use of so-called “acetylcholinesterase inhibitor drugs.” These are drugs like donepezil (Aricept®) that are marketed as an “Alzheimer’s treatment.” There is a tendency for these drugs to be prescribed for cognitive decline even before the diagnosis of Alzheimer’s is made. But not only do these drugs offer no benefit to the Alzheimer’s patient, these researchers caution against their use in the early stages of cognitive decline stating that they “…should not be used for Alzheimer’s disease prevention in cognitively impaired individuals.”

This comprehensive report should be looked upon as offering us empowering strategies to allow us to preserve brain health and function. Further, it lends robust support for the goals and  mission in our series Alzheimer’s – The Science of Prevention. In this series we explore each of these strategies as we present a comprehensive program geared at giving each of you the very best chance to preserve and protect your brain.