Alzheimer’s Risk Cut in Half! 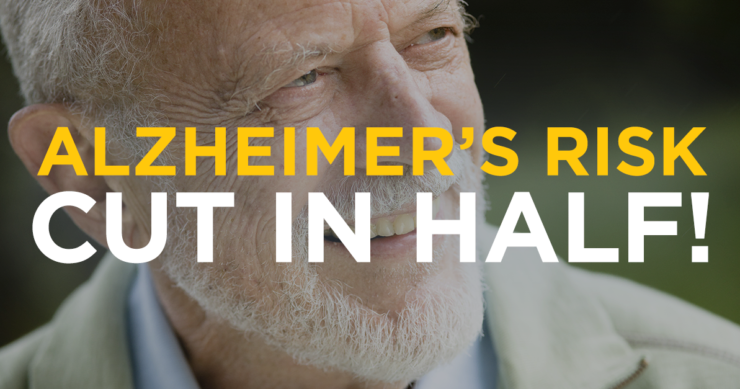 When you survey people to determine what diseases they fear the most, Alzheimer’s is always among the top answers. Its been estimated that in America today there are approximately 5.4 million of us who’ve been given this diagnosis. To call it like it is, Alzheimer’s is a disease for which there is no meaningful treatment, whatsoever.

But what if medical researchers could identify some sort of treatment or intervention that could conceivably reduce a person’s chances of developing this incurable condition? What if there was a way that you could reduce your odds of this most common form of dementia by half?

As it turns out, top-notch researchers have just identified a supplement that does just that, and the name of this supplement you are going to want to make a part of your daily routine is: exercise.

In an exciting new study just published in the Journal of Alzheimer’s Disease, researchers from four major research institutions followed 876 adults over a 30-year span and kept careful records of the amount and type of exercise that each participant reported. In addition, each of the individuals underwent a rigorous mental examination to determine brain function. Further, all of the participants had imaging of their brains with a sophisticated MRI scan.

The results were astounding. The researchers showed that in those folks engaged in higher levels of exercise, there was a substantial increase in the amount of the brain’s gray matter, when compared to those who were less active. In addition, those at the highest level of exercise activity experienced an incredible reduction of risk for Alzheimer’s by 50%, when compared to those who were more sedentary.

The lead author of the study, Cyrus A. Raji, MD, PhD, of UCLA, was quoted as stating:

This is the first study in which we have been able to correlate the predictive benefit of different kinds of physical activity with the reduction of Alzheimer’s risk through specific relationships with better brain volume in such a large sample.

We live in a time when we have been fairly well trained to expect “magic bullets” for our ailments. When it comes to Alzheimer’s, none exists. Yet, look at how you can safeguard your brain by just going out and buying a new pair of sneakers.