Another Reason to Avoid Fructose 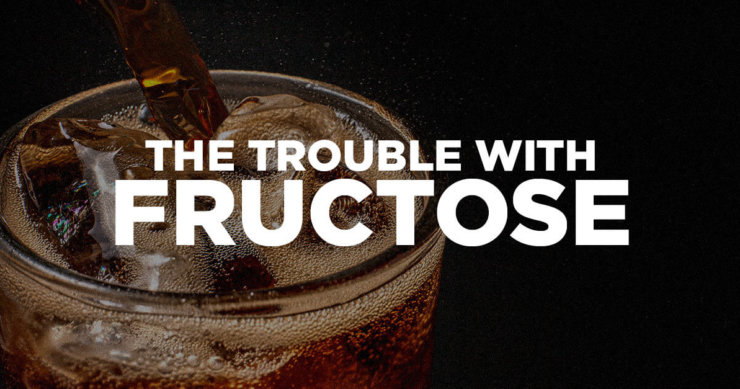 Is high fructose corn syrup (HFCS) really as much of a problem as people would like us to believe? And in fact, what about fructose in general? After all, the actual biochemistry of fructose metabolism does not activate insulin, and therefore it might not be as big of an issue in terms of representing a health threat compared to other sugars, like glucose or dextrose. Right?

Well, let’s dig into the science a little bit and see what we can learn. In a new study published in the Journal of Hepatology, researchers wanted to explore how fructose, sucrose (common table sugar, which is made up of 50% glucose and 50% fructose), or glucose affected the body in terms of some fairly important parameters like the generation of fat in the liver.

The study evaluated the effects of these sugars in 94 healthy young men over a seven-week period. The subjects consumed, on a daily basis, drinks containing fructose, sucrose, or glucose, 80g per day, or a drink that did not contain sugar.

The researchers observed that in the individuals consuming fructose either by itself or in combination with glucose (sucrose), the formation of fat in the liver increased by twofold compared to those who were not consuming sugar-sweetened beverages. Glucose consumption did not have this effect.

The creation of fat in the liver induced by fructose exposure represents a significant health threat. It directly increases insulin resistance, and as such, paves the way for type 2 diabetes. Downstream consequences of type 2 diabetes are quite compelling and include increased risk for things like Alzheimer’s disease, cancer, and coronary artery disease, to name just a few.

Let’s put this sugar consumption in context. Close to 70% of the 2 million different types of foods sold in America’s grocery stores have added sweetener, mostly HFCS. People buy things that are sweet, that’s for sure. And the usage of HFCS by industry is motivated by two things. It is sweeter than regular sugar and it is far less expensive.

And this study, like so many others, reaffirms that fructose, either in the form of sucrose or HFCS, is a dangerous threat to our health.

What is so intriguing about this research is that the amount of fructose that was used in the study, 80g daily, is equivalent to approximately 0.8 L of a normal soft drink. And this amount doubled fat production in the liver, a harbinger for bad outcomes as it relates to health. We are talking about the amount of sugar in just over two cans of sugar-sweetened beverages each day. So, it’s not as if these research subjects were exposed to an overwhelming amount of fructose to have this effect.

“An apple a day keeps the doctor away?” I’m all in. Having some fruit is a good choice because it is not associated with these issues despite the fact that it does contain fructose, a word that is actually derived from “fruit sugar.” But in reality, the amount of fructose in, say an apple, is quite low, and importantly, other constituents of the apple, like fiber for example, offer up significant offsets to the threatening aspects of fructose. Indeed, fruit consumption is actually linked to a lower risk for type 2 diabetes.

And finally, while it’s not that difficult to castigate sugar-sweetened beverages because of their fructose content, keep in mind that even 100% fruit juice, despite its healthy sounding connotation, is absolutely something to be avoided as well, again because of its fructose content. And research clearly shows that fruit juice consumption, at least in women, also increases diabetes risk, as expected.

Looking forward to exploring this further in my next book, Drop Acid. Sign up here for updates!