Link Between Medication During Infancy and Allergies in Early Childhood?

Is There a Link Between Medication Use During Infancy and Allergies in Early Childhood? 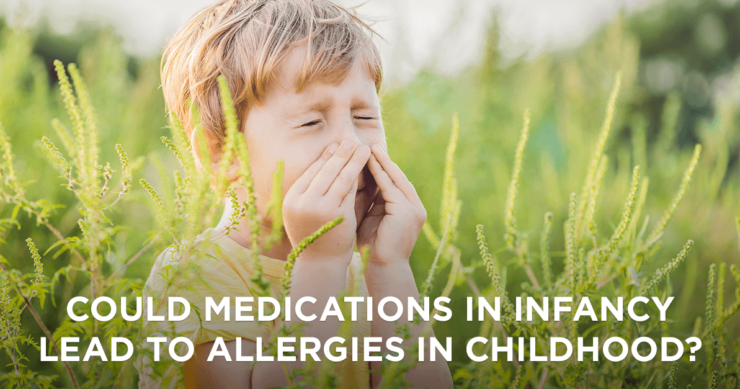 As we all know, allergic diseases, particularly in childhood, are becoming more and more common. It’s not just that we are becoming more aware of allergic diseases, think of the frequent announcements on airplanes about peanut allergies, or food allergy questions by the waiter at dinner. No, the reality of the situation is that, by and large, allergies are simply far more common than they used to be.

So, why is this happening? Let’s take a step back and recognize that the intestines, oddly enough, actually play an important role in determining our immune responsiveness. Specifically, we now understand that the gut lining itself actually plays an important role in regulating immune function. Permeability, or leakiness, of the gut lining is associated with alteration in immune function as well as changes to the set point of inflammation.

In a new study, published in JAMA Pediatrics, researchers, in recognizing the fact that allergic diseases are increasingly prevalent in children, wanted to determine if acid-blocking drugs or antibiotics may influence the likelihood of allergy. Their justification for their study focused on the fact that early exposure to medications can alter gut organisms.

The study was retrospective, meaning that it looked back at health records of close to 800,000 children, and tried to find associations between allergies and exposure to either acid-blocking drugs or antibiotics during the first six months of life. Risk for allergy was determined during a period of up to 4.6 years.

The results of the study were indeed profound. The risk of developing food allergy was more than doubled in children receiving acid-blocking drugs during their first six months of life, while the risk for asthma was increased by 41% in these children.

The conclusion of the study stated:

This study found associations between the use of acid-suppressive medication and antibiotics during the first six months of infancy and subsequent development of allergic disease. Acid suppressive-medications and antibiotics should be used during infancy only in situations of clear clinical benefit.

The authors further explained how changes induced in gut microorganisms may well be responsible for these changes in immune health that result in allergy.

So once again, we are seeing well-respected literature focus on providing information that can allow us to make decisions that have lifelong implications. In this case, early life changes in gut organisms, brought on by medication exposure, might well increase the risk for lifelong disease.