Bears and the Human Microbiome 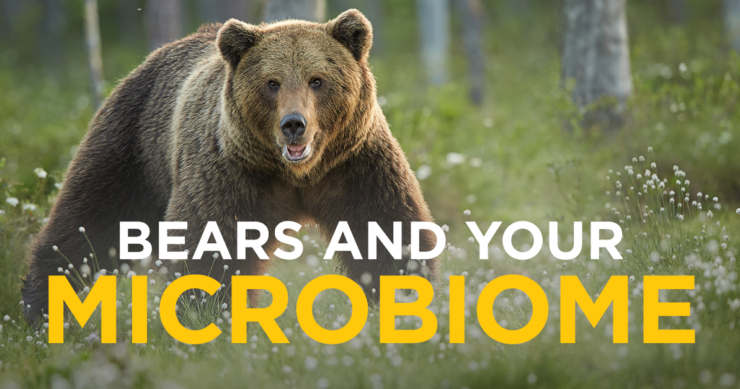 As many of you know,  I have written extensively over the past several years about the important role of the microbiome. Those 100 trillion organisms that live within the gut, as well as their genetic material, are essential to the body’s regulation and metabolization of food. Notably, this has specific relevance as it relates to obesity.

Last week, a very fascinating bit of research was published in the journal Cell Reports. The scientists who published the paper studied the gut bacteria of 16 wild brown bears during both the summertime and wintertime hibernation. Understand that when a bear is foraging for food in the summertime it is consuming a fairly high-calorie diet, rich in carbohydrates, which helps the bear store body fat for the long process of hibernation. During hibernation, bears are able to tap into their body stores of fat as an energy source.

What the researchers found, when looking at the microbiomes of these bears, is that there is a dramatic difference in the array of bacteria in the summertime versus the wintertime when the bears enter hibernation. During the summertime, when a bear will as much as double its body fat, there was a high representation of the group of bacteria called firmicutes, while the group bacteriodites was reduced. The opposite was true in the winter time when firmicutes were generally lower and bacteriodites were increased.

Interestingly, these are the same changes in ratios that are observed in humans. We see higher levels of firmicutes being associated with obesity and diabetes, and this is precisely the type of changes seen in these bears when they were experiencing rapid weight gain.

What was even more exciting about this study is that they took groups of germ-free mice and inoculated them with the fecal microbiomes from the summertime bears, as well as from bears during hibernation. Incredibly, the mice who received the fecal transplant from the summertime bears demonstrated dramatic increase in both weight and body fat in comparison to the mice that were inoculated with the microbiomes from hibernating bears.

What this tells us is really quite profound. It indicates that the balance of bacteria within the gut play a huge role in regulating how we deal with the foods we eat, notably in terms of producing fat, or not. It looks like higher levels of firmicutes act in such a way as to make it more likely to signal our body that winter is coming, and that we have to store fat for survival. Diets that are higher in sugar and carbohydrates in general, as well as diets with higher levels of various artificial sweeteners, are associated with a microbiome that is higher in the firmicutes group.

The main point I want to emphasize is that we’ve got to pay very close attention to the health and balance of our got bacteria if we want to maintain healthy body weight.