Beyond Genetics - Our Choices Chart Our Brain's Health Destiny

Beyond Genetics – Our Choices Chart Our Brain’s Destiny 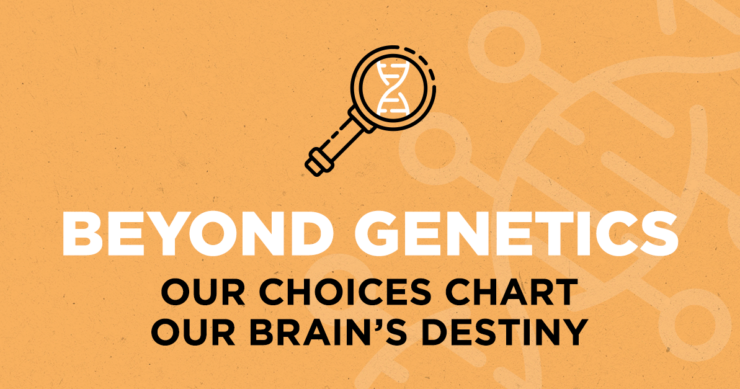 One of the most important goals of my life is to raise the level of awareness of the importance of lifestyle choices in determining a person’s risk for Alzheimer’s disease, a disease for which there is no meaningful medical treatment. To be sure, this narrative isn’t something that mainstream medicine fully embraces. But this isn’t necessarily a surprise as the whole notion of disease prevention still remains on the back burner as far as the world of Western medicine is concerned.

But the publications showing the powerful influence of specific lifestyle choices on Alzheimer’s risk are appearing with ever-increasing frequency in the world’s most well respected scientific publications. To that point, The Journal of the American Medical Association just published a powerful report looking at the relationship between genetic predisposition for dementia and the influence of lifestyle choices. This study begins by indicating that there are genetic risks for dementia. It then describes the focus of the research being dedicated to determining how much of the genetic risk may be offset by making specific choices in terms of things like smoking, diet, physical activity and alcohol consumption.

There are multiple genetic risk factors for dementia and the researchers created what they termed the “polygenic risk score” for each of the nearly 200,000 individuals in the study. This allowed them to rank each participant from lowest to highest risk for dementia from a genetic perspective. The data revealed that 20% of the subjects were ranked as high-risk for dementia, 60% were in the intermediate range, and 20% were considered low-risk. In addition to genetic predisposition, the above described lifestyle factors were analyzed.

The conclusion by the authors stated:

A favorable lifestyle was associated with a lower dementia risk among patients with high genetic risk.

We are all at risk for Alzheimer’s disease and we can’t do anything about our genetic inheritance. But we surely can make good lifestyle choices which, as these researchers in one of the most respected medical journals on the planet have confirmed, can powerfully impact our risk for a disease for which, again, there is no meaningful medical treatment whatsoever.

This study, and so many more, underpin the importance of our online documentary series, Alzheimer’s – The Science of Prevention. This free presentation features the most forward thinking Alzheimer’s clinicians and researchers in America and is designed to provide the tools to make a difference in your brain’s destiny.

Alzheimer’s risk is absolutely modifiable, and the choices we make today play central roles in terms of future brain health and functionality. This is clearly empowering information.