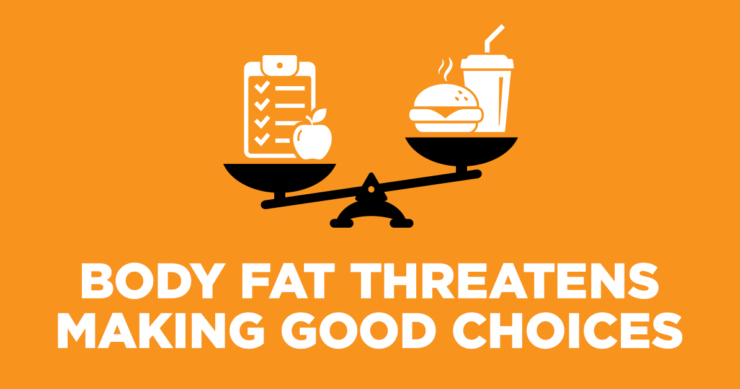 How does excess body fat affect the brain? Over the past several years we have been describing the various mechanisms whereby body fat increases the production of the chemical mediators of inflammation, and how inflammation is the underpinning mechanism of brain degeneration like we see in Alzheimer’s disease and Parkinson’s. But beyond considering risk of these conditions, it’s worthwhile to gain some understanding as to how excess body fat might, moment to moment, affect how the brain is functioning.

In a study published in Obesity, researchers aimed to determine if there is any relationship between excess body fat and cognitive function, specifically executive function, attention, and memory. In 21 individuals, with BMIs from 19 (normal) to 37 (obese), they used sophisticated brain scans that are able to determine metabolism in various regions of the brain.

What the researchers discovered was compelling, and very important. Their research revealed a dramatic correlation between higher levels of BMI and reduced activity in the area of the brain called the prefrontal cortex. Other areas did not show this correlation. In other words, the higher the body mass index, the more the prefrontal cortex was reduced in its function.

Disconnection from the prefrontal cortex, or being in a situation where the prefrontal cortex is not working optimally, as we have just learned is the case when having a higher BMI, allows other areas of the brain to be more influential on our behavior. One of these regions is called the amygdala, and this is an area of the brain that seems to be involved with things like impulsivity, and narcissism.

So, let’s consider the implications of this report. Higher levels of body fat, as is seen with a higher BMI, are associated with less activity in the prefrontal cortex. This then threatens the ability to make good decisions. This becomes very important as it relates to the choices a person might make with respect to lifestyle. Having increased body fat might then lead to brain changes that foster poorer choices as they relate to food and exercise, for example. This creates a vicious cycle whereby excess body fat ultimately leads to further accumulation of body fat and further disconnection from the prefrontal cortex and more bad choices.

Brain Wash focuses on reclaiming our ability to make good choices by reconnecting to the prefrontal cortex. Certainly, by now, most all of us have a pretty good idea as to what constitutes good lifestyle choices in terms of diet, exercise, sleep, relationships, meditation, and spending time in nature. So, the issue isn’t that we are not getting this information. The disconnect happens when we don’t follow through and choose to make the changes that are necessary to reap the benefits of all the good information.

Yes, we can rewire the brain, and distance ourselves from the impulsive amygdala while fostering better connection to the prefrontal cortex that allows better decision-making. We can truly create a better brain and end Disconnection Syndrome!

Don’t forget to order your copy of Brain Wash today!