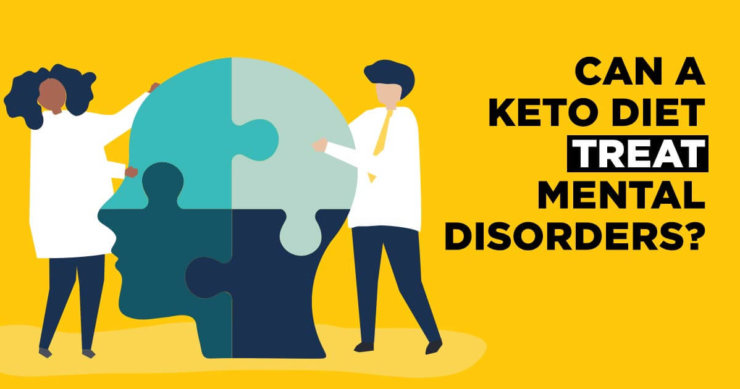 The ketogenic diet appears often in content I share as it offers a host of health benefits for conditions including Alzheimer’s disease, epilepsy, Parkinson’s disease, diabetes, and more. That list may now include mental disorders. As I recently discussed with Dr. Uma Naidoo, nutritional psychiatry is centered on how food affects mental health. While dietary interventions are known to serve multiple preventive and therapeutic roles in human health, it is exciting that there is a burgeoning field focusing specifically on how nutrition impacts mental disorders, especially in these challenging times.

Researchers at Oxford University, Stanford University School of Medicine, and Harvard Medical School just published a review in the journal Current Opinion in Endocrinology, Diabetes and Obesity entitled “Ketogenic diet as a metabolic treatment for mental illness”. They explore the fact that psychiatric illnesses such as schizophrenia, bipolar disorder, major depressive disorder (MDD), and binge eating disorder are neurometabolic diseases that share underlying mechanisms. And it is these specific mechanisms that may well lend themselves to treatment using a ketogenic diet. The four shared mechanisms are:

Let’s walk through these mechanisms and how a ketogenic diet may positively address each of them.

First, hypo- is a prefix meaning “below” or “less than normal”, so glucose hypometabolism means that the rate at which glucose is metabolized is reduced. Glucose hypometabolism in the brain—a common characteristic of neurological diseases including Alzheimer’s disease, Parkinson’s disease, and epilepsy—is also a feature of mental illnesses including schizophrenia, bipolar disorder, and MDD. Interestingly, in brains of patients with schizophrenia, an increase in a ketone importer was discovered, implying that the brain may have been attempting to compensate for glucose hypometabolism by enhancing its uptake of ketones.

Oxidative stress arises when reactive oxygen species in the body overwhelm antioxidant defense capacity, leading to potential biological damage. A contributor to a myriad of chronic and neurological diseases, oxidative stress also plays a role in schizophrenia, bipolar disorder, and MDD. Ketogenic diets can diminish oxidative stress via alterations in metabolism and signaling by decreasing or inhibiting pro-oxidant factors and boosting antioxidant defenses. For more information on how a ketogenic diet can increase antioxidant activity, feel free to check out this video I recorded.

Inflammation pertains to so many health conditions, but inflammation in the brain, now well known to be associated with degenerative conditions like Alzheimer’s and Parkinson’s, is also associated with mental illnesses. Increases in levels of inflammatory markers have been confirmed in brain tissue and cerebral spinal fluid of patients with psychiatric disorders. Moreover, microglia, immune cells that can serve pro-inflammatory functions in the brain, play a role in schizophrenia, bipolar disorder, and MDD. “Ketogenic diets can switch microglia from their pro-inflammatory to their anti-inflammatory, neuroprotective state,” as the authors of this review explain.

The researchers discuss existing evidence of effects of a ketogenic diet on mental illnesses in animal models and human trials. Studies have shown efficacy of a ketogenic diet in improving symptoms in some challenging disorders including attention-deficit/hyperactivity disorder (ADHD), autism spectrum disorder (ASD), anxiety, MDD, bipolar disorder, schizophrenia, and binge eating disorder. They also noted that the positive results of the ketogenic diet in a variety of conditions may be mediated by favorable changes in the gut microbiome.

Additionally, the authors present two case series from their research groups showcasing remarkable clinical improvement with a ketogenic diet. The first case series reported on two patients, one with a 53-year history of schizophrenia who suffered from paranoia, auditory hallucinations, and multiple suicide attempts and another who suffered from depression, suicide attempts, and schizophrenia for over 20 years. Within several weeks, both patients experienced noticeable improvement in symptoms and eventually were relieved of all symptoms and stopped all psychiatric medications. The second case series featured three patients with severe binge eating, food addiction symptoms, and obesity. When treated with a ketogenic diet, binge eating decreased substantially and the patients also lost weight and reported improvements in depressive symptoms.

While further research is needed to study how the ketogenic diet impacts mental illnesses, the researchers of this review offer an insightful vantage point for our understanding of psychiatric conditions and corresponding treatment considerations:

“…mental illnesses are not as biopathologically distinct from other chronic diseases as most people assume. …It is important that researchers and clinicians are made aware of the trajectory of the evidence for the implementation of ketogenic diets in mental illnesses, as such a metabolic intervention provides not only a novel form of symptomatic treatment, but one that may be able to directly address the underlying disease mechanisms and, in so doing, also treat burdensome comorbidities.”

Pharmaceutical intervention for mental disorders may at times offer benefits, at least as far as management of symptoms. This new research, however, offers up a powerful new line of therapy that may clearly aid in the treatment of some of our most challenging disorders.