CBD and Osteoporosis - A Meaningful Application For Bone Health? 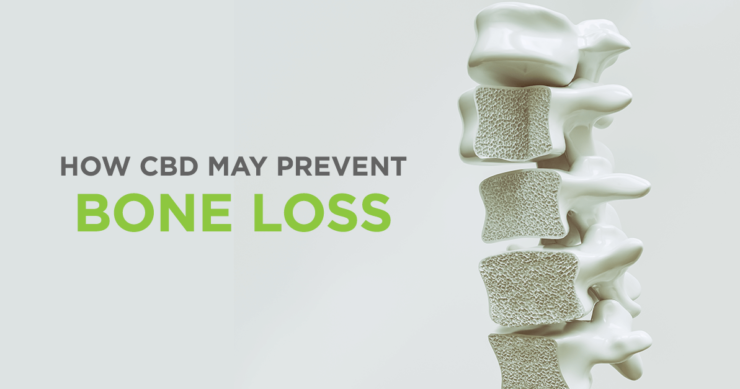 Osteoporosis and low bone mass (osteopenia) represent a major public health threat here in the United States, affecting over 53 million American women and men aged 50 and older. To be clear, this represents more than half of the people in this age group.

Certainly, the main issue that people become concerned with when discussing osteoporosis is the dramatically increased risk of associated bone fracture, of which fractures of the vertebrae are the most common. Of course, associated hip fractures remain extremely important as well. In fact, as published in the Journal of the American Medical Association, nearly 65,000 women die from complications of hip fracture each year, and the risk of death within the first 6 to 12 months after hip fracture is an astounding 25%.

There are certainly many factors that contribute to abnormal thinning of the bone, like inadequate vitamin D, vitamin K, calcium, magnesium, and weight-bearing exercise. New research is honing in on the actual mechanisms that degrade bone. The density of bone, to a significant degree, represents the balance between the activity of two types of cells. Osteoblasts, which are involved in producing bone, and osteoclasts, which are the cells that degrade bone.

New research has identified a cell receptor on osteoclasts that, when activated, increases their activity and speeds bone degeneration. This receptor is known as the GPR55 receptor. In laboratory animals, administration of chemicals that stimulate this receptor turn on the action of osteoclasts, and subsequent loss of bone density.

One might assume that using an antagonist, or a chemical that blocks the GRP55 receptor, would reduce the activity of osteoclasts and help preserve bone density. In fact, that is specifically what was demonstrated in a study appearing in Proceedings of the National Academy of Sciences. In this study, the researchers demonstrated that cannabidiol (CBD) specifically blocked the activation of this receptor, and this effectively, and quite dramatically, reduced the activity of the osteoclasts, the cells that degrade bone.

Keep in mind that bone density represents the balance between making bone and degrading bone. When the cells that degrade bone, the osteoclasts, are inhibited, it allows the osteoblasts to work more effectively, tipping the balance in favor of increased bone density. This has been clearly demonstrated, at least in laboratory animals.

Further, other researchers have shown that bone healing after fracture takes place much more quickly, again in laboratory animals, when exposed to CBD.

As it relates to humans, there certainly isn’t much clinical research that yet verifies the utility of CBD in terms of reducing bone thinning or healing a bone fracture. Nonetheless, the idea of extrapolating from animal data is certainly nothing new in medical research. My purpose in presenting this information is simply to raise awareness as to where we are, currently, in this science. It is vey exciting, especially as we look towards the future in terms of what CBD, a naturally occurring chemical, could bring to the table for providing us with tools to treat many of the most severe maladies of our times.