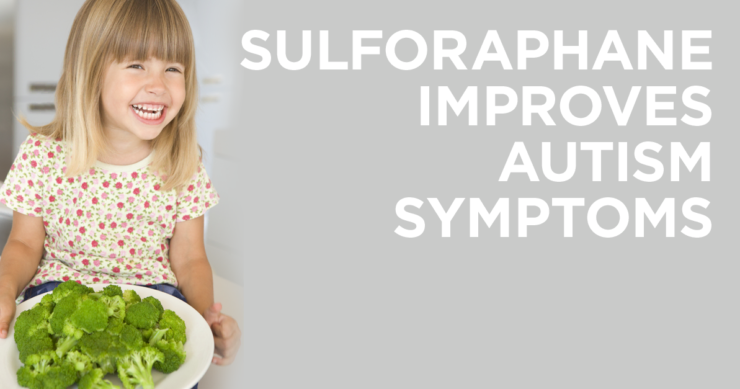 Normally, I would be sharing a new blog post with you today. In fact, I already had one lined up about the link between antidepressants and weight gain (which I hope you’ll check back for in a few days). However, just this week a press release from Massachusetts General Hospital (MGH) found its way to my inbox, and I was so caught by the results of the study they reported, that I want to immediately share it with all of you. What this study means for the treatment of autism is groundbreaking.

Read MGH’s press release below, copied in its entirety, and view the original study here, for your reference. You can learn more about sulforaphane, the subject of this groundbreaking research as it relates to Parkinson’s disease, in this 2013 study.

BOSTON – A small study led by investigators at MassGeneral Hospital for Children (MGHfC) and Johns Hopkins University School of Medicine has found evidence that daily treatment with sulforaphane – a molecule found in foods such as broccoli, cauliflower and cabbage – may improve some symptoms of autism spectrum disorders. In their report being published online in PNAS Early Edition, the investigators describe how participants receiving a daily dose of sulforaphane showed improvement in both behavioral and communication assessments in as little as four weeks.

The authors stress that the results of this pilot study – conducted at the MGHfC-affiliated Lurie Center for Autism – must be confirmed in larger investigations before any conclusions can be drawn about sulforaphane’s therapeutic benefit. “Over the years there have been several anecdotal reports that children with autism can have improvements in social interaction and sometimes language skills when they have a fever,” explains Andrew Zimmerman, MD, a co-corresponding author of the current report who also published a 2007 paper documenting the fever effect. “We investigated what might be behind that on a cellular level and postulated that it results from fever’s activation of the cellular stress response, in which protective cellular mechanisms that are usually held in reserve are turned on through activation of gene transcription.” Affiliated with the MGHfC Department of Neurology, Zimmerman is now based at UMass Memorial Medical Center.  Sulforaphane was first isolated in the 1990s by Paul Talalay, MD – co-corresponding author of the PNAS Early Edition paper and now a professor of Pharmacology and Molecular Sciences at Johns Hopkins – and his group also found that the chemical supports key aspects of the cell stress response.  Zimmerman, who was based at Hopkins when he published the fever paper, approached members of Talalay’s team to propose investigating sulforaphane’s possible benefits for treating autism. While the mechanism underlying autism and other disorders on the autism spectrum remain largely unknown, several molecular abnormalities – including some related to the cellular stress response – have been identified. After Zimmerman moved to MGHfC in 2010, the trial was initiated at the Lurie Center in Lexington, Mass.

The study enrolled 44 young men, ages 13 to 27, who had been diagnosed with moderate to severe autism spectrum disorder. Participants were randomly assigned to a daily dose of either sulforaphane – extracted from broccoli sprouts – or a placebo, with neither investigators, participants nor their caregivers knowing who was receiving the study drug. Participants were assessed using standardized measurements of behavior and social interaction – some completed by caregivers, some by study staff – at the outset of the study and at 4, 10 and 18 weeks after treatment began. Treatment was discontinued after 18 weeks, and additional assessments of 22 participants were conducted 4 weeks later. Study lead author Kanwaljit Singh, MD, MPH – of MGHfC, the Lurie Center and UMass – says that among the 40 participants who returned for at least one evaluation, the average scores for each of the assessments were significantly better for the 26 participants receiving sulforaphane than for the 14 who received a placebo. Even at the 4-week visit, some caregivers reported a noticeable behavioral improvement, and by the end of the study period, both study staff and family members correctly guessed the assignments of many participants.

Overall, 17 of the 26 participants who received sulforaphane were judged by their caregivers to have improvements in behavior, social interaction and calmness while on active treatment. After 18 weeks of treatment, the average scores on two assessments – the Aberrant Behavior Checklist and Social Responsiveness Scale – of those who received sulforaphane had decreased 34 and 17 percent, respectively – indicating improvement in factors such as irritability, lethargy, repetitive movements, hyperactivity, communication, motivation and mannerisms. Assessments using the Clinical Global Impression scale indicated that 46 percent of sulforaphane recipients exhibited noticeable improvement in social interaction, 54 percent in aberrant behaviors, and 42 percent in verbal communication.

Most but not all of the improvements had disappeared by the 22-week reassessment, supporting the probability that changes had been the result of sulforaphane treatment. “When we broke the code that revealed who was receiving sulforaphane and who got the placebo, the results weren’t surprising to us, since the improvements were so noticeable,” says Zimmerman, now a professor of Pediatric Neurology at UMass. “The improvements seen on the Social Responsiveness Scale were particularly remarkable, and I’ve been told this is the first time that any statistically significant improvement on the SRS has been seen for a drug study in autism spectrum disorder. “But it’s important to note that the improvements didn’t affect everyone – about one third had no improvement – and the study must be repeated in a larger group of adults and in children, something we’re hoping to organize soon,” he adds. “Ultimately we need to get at the biology underlying the effects we have seen and study it at a cellular level. I think that will be done, and I hope it will teach us a lot about this still poorly understood disorder.”

What the authors concluded was that the activity of sulforaphane in terms of activating the Nrf2 pathway was likely the reason for its success. The Nrf2 gene pathway, when activated, dramatically reduces inflammation in the brain while increasing antioxidant protection. Sulforaphane is a powerful activator of Nrf2 and this is the reason we have included it in Nrf2 Advantage. Nrf2 Advantage has become one of my top nutritional supplements that we use in our clinic.