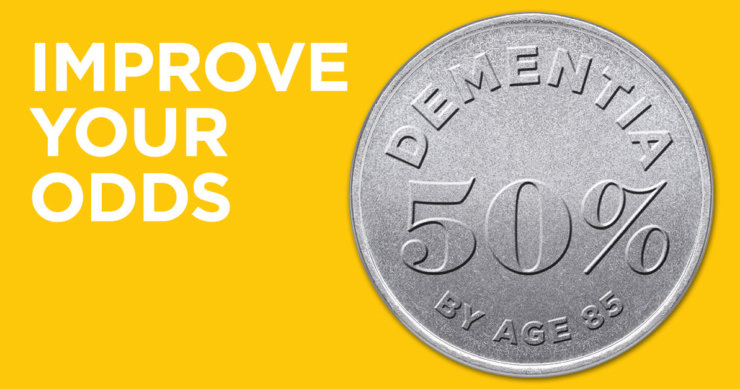 It has been estimated that there are around 45 million individuals worldwide who are suffering from dementia. Even more compelling are the projections that this number will nearly double in just the next 15 years.

As statistics now stand, we as Americans have around a 50 percent chance of being diagnosed with dementia by the time we reach 85 years of age. That means it’s basically a flip of coin that determines whether we will be in a position to care for ourselves or slip into a place that causes us to be dependent on others for our so-called “activities of daily living.” These include such things as dressing ourselves, preparing food, and personal hygiene.

It’s now become clear that certain issues are associated with worsening the odds of becoming cognitively impaired. For example, a lower level of education, having a parent or sibling with dementia, previous head trauma, or having had a stroke, all increase the odds of developing Alzheimer’s disease – a disease for which there is no treatment whatsoever.

There’s obviously nothing we can do about the genes we inherit from our parents. And in general, most of us adults have moved past our educational pursuits. But we can do our best to reduce our risk of head trauma. The simple act of wearing appropriate head protection can go a long way to safeguarding delicate brain tissue and may therefore help reduce dementia. That means choosing to wear a helmet when snow skiing or snowboarding, horseback riding, or riding a bike, scooter or motorcycle.

I’m often puzzled as to why, in my home state of Florida, seatbelt use in the car is mandatory but the helmet law requiring the use of head protection while operating a motorcycle was long ago taken off the books. As soon as that happened head injuries associated with motorcycle accidents skyrocketed.

Stroke, also associated with increased dementia risk may itself be somewhat avoidable. Stroke is increases in individuals with uncontrolled blood pressure as well as elevation of a blood marker, homocysteine, both of which can be corrected.

Type 2 diabetes may be associated with as much as a four-fold increase in dementia risk and by and large, type 2 diabetes is related to modifiable lifestyle choices, primarily diet but also including exercise.

In an interesting report appearing in the May 5, 2015 edition of the journal, Neurology, Mayo Clinic researchers attempted to determine if certain lifestyle factors may actually be protective in terms of developing dementia later in life. They evaluated 256 participants, all over age 85, and found that those subjects in midlife and even late life who engaged in artistic pursuits experienced a risk for developing dementia that was an astonishing 73% lower than those who were not involved in doing things art related. Using a computer was associated with a dementia risk reduction of a remarkable 57%!

So while we don’t as yet have a meaningful treatment for dementia, it’s worth noting that we do have choices in terms of issues that are associated with improving our odds. For many of us, we’re already spending plenty of time on the computer. But perhaps it’s time to visit the art store and buy some paint and a canvas.