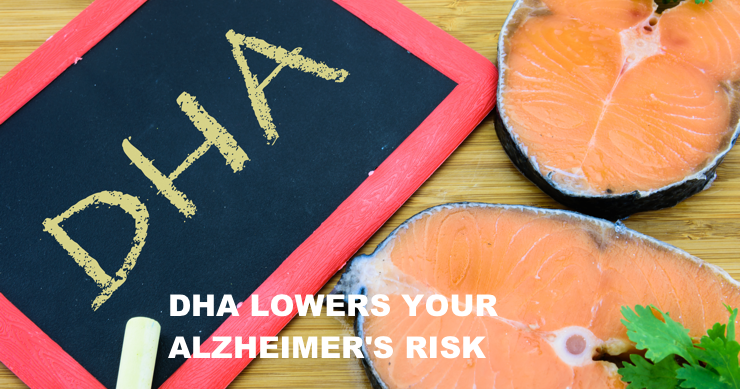 Alzheimer’s prevention is now getting lots of attention – gratefully!  It seems like we are seeing powerful science revealing how lifestyle choices affect our brain’s destiny appearing in well respected medical journals on an almost daily basis.

A validated Alzheimer’s prevention program stands on several fundamental legs including regular exercise, keeping blood sugar under control, not becoming obese, and making sure you consume an adequate amount of DHA, an important omega-3 fatty acid, and the subject of this article.

DHA, short for docosahexaenoic acid, is an essential fatty acid. This means that it is essential that we get DHA from the foods we eat or the supplements we take, as, much like vitamin C, our bodies are not capable of creating enough DHA for our physiological needs.

Sources of DHA include various forms of seafood, especially fatty fish like salmon and mackerel, as well as oysters and clams. DHA supplements often derive their DHA from cod livers and there’s even a plant-based DHA supplement made from the DHA produced by marine algae.

The relationship between DHA status and risk for developing dementia, or Alzheimer’s dementia specifically, was recently investigated with results published in the journal, Nutrients. Researchers followed close to 1500 non-demented individuals, aged 65 years or older, for an average of 7.2 years. At the beginning of the study, a blood analysis was performed measuring the DHA content of the participants’ red blood cells. This measurement was chosen as it most accurately and objectively reflects an individual’s DHA status which is a consequence of their long-term dietary intake of DHA.

The researchers uncovered a powerful link between low levels of DHA and Alzheimer’s risk. When comparing those with the highest DHA levels to those with the lowest, the high DHA group had a remarkable 49% reduced risk for developing Alzheimer’s disease – a disease for which there is currently no meaningful FDA approved treatment.

Further, the authors were able to predict that those with the highest DHA levels would experience an estimated 4.7 more years of life, free of Alzheimer’s disease.

There are certain gene profiles that are associated with an increased predisposition for Alzheimer’s disease. Certainly, carrying the APOE E4 allele is a risk indicator that many people are aware of, especially now that personal genetic profiling is so widely available. And the relationship between Alzheimer’s, DHA and APOE E4 was also explored in this study. The authors determined that there was a benefit associated with dietary DHA, but specifically characterized this benefit as stating:

“There is increasing evidence for cognitive benefit from dietary DHA in cognitively healthy ε4 carriers (consistent with our findings), but not in those with Alzheimer’s disease or mild cognitive impairment. Therefore, there may be a window of opportunity to identify cognitive healthy ε4 carriers and manage their associated elevated dementia risk with a dietary intervention (i.e., dietary DHA, but requiring doses close to 2 g/d).”

In fact, the effect of DHA in terms of Alzheimer’s risk reduction was even more pronounced in the E4 carriers than in those without this genetic risk predisposition indicator. And this matters immensely. Oftentimes when people find out that they carry the E4 allele they may feel like their future in terms of Alzheimer’s risk has been decided. But now we know that simply having a higher level of DHA may well and significantly offset that risk. I call that empowerment!

Here’s what the authors concluded:

In conclusion, in a cohort of dementia-free participants from the Framingham Heart Study aged 65 years and older, we observed that those with a baseline red blood cell DHA proportion above 6.1% (top quintile) had nearly half the risk of developing Alzheimer’s disease (and all-cause dementia), and had an estimated 4.7 extra years of life free of Alzheimer’s disease compared to those with an red blood cell DHA below 3.8% (bottom quintile)…Our results, which concur with a growing experimental research foundation, suggest that an increased DHA intake may be a safe and cost-effective strategy in preventing Alzheimer’s disease in specific populations.

My recommendation is that adults should consider taking a minimum of 1 gram of DHA daily with those who test positive for caring the E4 allele the taking 2 grams each day. Keep in mind that with your fish oil supplement, for example, it’s important to read the label to get a full understanding as to how much actual DHA is contained in a given dose.

Finally, you may well be able to check your own red blood cell DHA level as this test is now available to doctors around the country.