Diet and Depression: An Updated Perspective from Dr. Austin Perlmutter

Diet and Depression: An Updated Perspective 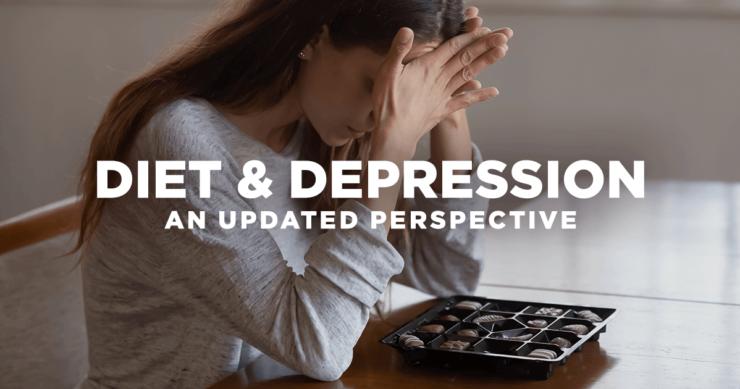 In conventional medical practice, the connection between diet and mood seems barely, if ever, mentioned. Depression is deemed a disease of the mind, or of the brain, treatable with psychotherapy or potent pharmaceuticals. In the latter, the focus seems primarily on modulating neurotransmitters like dopamine, serotonin, and norepinephrine.

Yet in the last several decades, there’s also been a push to revitalize dietary interventions for mood, especially for depression. Some have advocated strongly that food-based therapy is the solution to most health issues including mood disorders. But what does the current research in this field actually say, and are we interpreting it correctly?

Scientific data connecting food and our mood are ever expanding. So, it’s important that we occasionally reevaluate the current research. In the last few years, we’ve seen the advent of randomized trials connecting diet and depression. These have seemed promising. However, there’s more to this story than meets the eye.

Despite all prior efforts to remedy the problem, depression remains a major issue worldwide. Trends indicate higher rates of depression, especially in vulnerable populations. With a growing understanding of the importance of preventive care, it’s no surprise that researchers have focused their efforts on modifiable risk factors for depression. This unsurprisingly promoted an increased emphasis on diet in mental health research.

For the most part, research on the connection between diet and depression has been observational. Basically, look for symptoms of depression, ask people what they eat, and see if there’s a connection. And there are certainly plenty of papers that do just that. These studies have been sequentially analyzed in reviews that seek to tease out unifying themes. For example, one population-based review in the American Journal of Clinical Nutrition from 2014 looked at 13 observational studies, finding a diet high in fruit, vegetables, fish, and whole grains was associated with decreased risk for depression. And reviews continue to be published.

In 2017, a meta-analysis published in Psychiatry Research concluded that the Western dietary pattern (red/processed meat, refined grains, sweets, high-fat dairy, butter, potatoes, and low amounts of fruits and vegetables) correlated with an increased risk for depression, while a healthy eating pattern (olive oil, fruit, vegetables, whole grains, fish, low-fat dairy, low amounts of animal food) showed the opposite. Similar results are also seen in more recent analyses including some that have found a negative impact of a “pro-inflammatory diet” on depression.

In general, the results of these reviews seem well summarized by a 2020 article in the British Medical Journal, which concludes “Healthy eating patterns, such as the Mediterranean diet, are associated with better mental health than ‘unhealthy’ eating patterns, such as the Western diet.” But there’s only so much we can gain from observational studies. Interventional trials must also be considered in this story. That’s why it’s notable that there is now a small set of randomized controlled trials (RCTs) looking at the link between depression and food.

The first RCT on the subject was the SMILES trial, an Australian study that randomized adults with depressive symptoms and “poor” baseline diet to one of two study arms. One half of the participants participated in a dietary (intervention) arm that featured a variety of tactics to improve diet. These included 7 sessions in which general dietary advice was provided, as well as nutritional counseling featuring motivational interviewing and mindful eating. The social support (control) group spent an equivalent amount of time in conversations with “trained personnel” about neutral topics like sports or music. At the end of 12 weeks, depressive symptoms between the control and intervention arms were compared. While both groups had decreased depressive symptoms, the dietary (intervention) arm fared significantly better than the social support arm.

That same year, Australians also completed the HELFIMED trial. Like the SMILES trial, it randomized adults with depressive symptoms to a social (control) arm and a dietary (intervention) arm. Compared to the SMILES study, the researchers amped up their dietary arm significantly. Here, the dietary arm received healthy food every two weeks, cooking workshops, omega-3 supplements, and nutrition education. The social arm attended social groups every 2 weeks where biscuits, cheese, dips, and juice were provided, games and conversation were promoted, and friendships were formed. Compared to the start of the study period, participants in the social arm showed a 26.8% improvement in depressive symptoms. Those in the dietary arm demonstrated a 45% improvement. Again, the researchers concluded that the dietary intervention was associated with greater decrease in depressive symptoms compared to the control group.

More recently, another RCT examined impact of a dietary intervention in younger adults. This 2019 study focused on New Zealanders, aged 17-35. To be included in the research, the participants had to endorse eating a generally unhealthy diet and elevated depressive symptoms. The diet (intervention) arm in this case provided a 13-minute video outlining dietary recommendations and recipes. Researchers also gave this group some food supplies including nuts and spices. The control group was given no information on diet or other interventions. Both groups completed surveys of depressive symptoms at the start of the experiment and then again 3 weeks later. The main outcome was a significant benefit in depressive symptoms in the diet group compared to the control group.

It would seem we could conclude that dietary interventions likely work for depression. Yet it’s important to retain some skepticism. If our goal is really to find the best solutions for depression, we need to be willing to question these data and ask how they could be skewed, as well as probe alternate explanations for the results. We also need to question our own biases. We might really want to believe that nutrition is the solution to depression, and this may color the way we see the data. Interestingly, a 2020 paper in PLOS ONE indicated that narrative reviews (which tend to be a bit more opinionated) were 9 times more likely to report a strong benefit of a healthy diet on depression than more objective systematic reviews. It seems even researchers may have a desire to overstate the current evidence.

What about our RCTs? Ideally, a RCT controls for all the variables except for the one being tested. A perfect RCT for diet and depression would examine two identical groups and only change the food that one group consumed. Obviously this was not the case in the aforementioned studies. Some people in the trials were provided with free food, offsetting the stress that comes from paying for and shopping for it. Social support was also a common theme in most of the RCTs. Substantial dietary education in various formats was also provided. Finally, despite a general focus on a Mediterranean-style diet, the food people consumed in the intervention arms of the trials likely varied considerably, with the HELFIMED trial additionally supplementing diet with omega-3 capsules.

Still, the data overall seem to reflect a growing consensus that a Mediterranean-style or anti-inflammatory diet may be helpful in the prevention and treatment of depression. And it’s imperative that we weigh the relatively low risk of diet against conventional pharmaceutical strategies for depression. In addition to high rates of side effects and withdrawal effects, antidepressants are ineffective in a large portion of the population. Indeed, while the most commonly cited rate of antidepressant efficacy is said to be 67%, this number may be far too generous.

Antidepressant drugs largely bypass the discussion of root causes of depression. At a basic level, it would seem we could consider etiologies of depression as two major buckets. There’s the substrate (the brain and body), and then there’s the way that the substrate interacts with the world. Antidepressants act on the first bucket. They are thought to target our neurotransmitters in a way that pushes them back to equilibrium, modifying our brain chemistry. However, this seems to be a rather small part of the puzzle. And there’s little emphasis on why and how that balance was disturbed in the first place.

The physical substrate of depression seems like it should be influenced at much deeper levels by dietary interventions. Unlike antidepressant drugs, foods are converted into the physical building blocks of our brains and bodies. Food is also turned into and changes the levels of the same neurotransmitters said to be affected by drugs. In addition, our diet is thought to influence a number of physiological systems implicated in depression. Most notable here may be immunity, as too much inflammation (unhealthy immune activation) has been strongly linked to depression. Food is one of our best tools at modulating levels of inflammation. This explains why so many of the aforementioned studies connecting diet and mood focus on “anti-inflammatory” diets.

More nuanced discussions of the food-mood connection highlight potential mechanisms of interaction between diet and emotional state. These focus on things like the cell-membrane effects of omega-3 fatty acids and immunomodulating effects of plant polyphenols. Increasingly, there is also an emphasis on how our foods influence our gut bacteria (the gut microbiome) and the downstream effects of gut-derived chemicals like short-chain fatty acids on our brains. Elaborating on these pathways is an important step forward in this research. However, it can also present a problem. That’s because “food” is not individual molecules. It’s a complex mix of macronutrients, micronutrients, and phytochemicals which, when combined, may have effects far different than what is revealed in a controlled lab experiment.

This difference between food and drugs means that comparing the effects of a concentrated chemical compound like an SSRI to a general diet-based intervention is difficult. Dietary impacts on mood may simply operate on a different timeframe than pharmaceuticals. It may also be more variable because of an increased dependence on things like gut bacteria and integrity of gut cells to properly absorb, metabolize, and assimilate the depression-fighting elements of the food. And it becomes even more important when considering the effects of adjunctive therapies for depression. For example, several of the aforementioned trials included substantial social interactions in addition to dietary modification. Social engagement helps lower stress, and stress may increase gut permeability and promote systemic inflammation. Additionally, the microbiome itself may be influenced by our social connections.

Considering all of these concepts together, the picture can appear muddied. For the foreseeable future, and for a wide variety of reasons, it’s unlikely that dietary change will emerge as a singular treatment for depression. Putting aside all the incentives for continued prescription of antidepressant drugs, the data on efficacy, mechanisms, and sustainability of food-based therapy (especially as monotherapy) isn’t all that robust just yet. Researcher perspectives also may be biased towards more concrete conclusions than are actually substantiated by the current research. With all this said, we desperately need new, safe, low-cost interventions for this debilitating condition. Diet modification for depression checks all these boxes. Additionally, the diets best studied for depression (anti- inflammatory/Mediterranean) have also been associated with a wide range of other health benefits including lower risk for cardiovascular disease, diabetes, and early death.

The bottom line: people worldwide are experiencing an epidemic of poor mental health. Among these debilitating conditions, depression remains at the top of the list. Current treatment strategies for this condition leave much to be desired. For those willing to change their eating habits, institution of a Mediterranean or anti-inflammatory diet is a practical choice. The efficacy of this intervention can likely be increased when coupled with consideration for gut and microbiome support, as well as environmental changes including increased meaningful social interaction and other stress-reducing strategies.