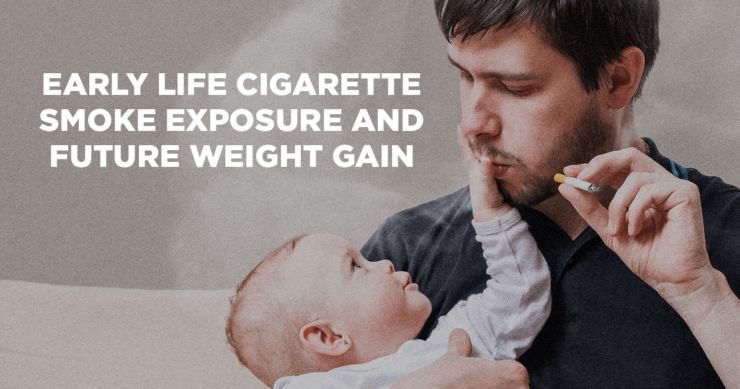 With ever increasing rates of overweight and obesity in America, we see, almost in lockstep, increasing rates of diseases that are linked to weight gain. Likely, mostly for cosmetic reasons, weight loss programs are proliferating at a record pace. And, truth be known, most weight loss programs, with strict adherence, will lead to weight loss, despite how they may vary in the diets that are recommended. While this challenges the notion as to what type of diet should be recommended for weight loss, it begs the question as to what gets people into trouble as it relates to weight gain in the first place.

It seems clear that there is a relationship between high consumption of refined carbohydrates and risk for weight gain. And for sure, other issues that are not specifically related to the types of foods people consume also have an impact on weight gain including things like sleep and exercise. But in this blog, I would like to consider new research that reveals how exposure to cigarette smoking from parent to child sets that child up for weight gain later in life.

In a recent study published in the journal Annals of Medicine, researchers in Finland performed weight, height, and waist circumference measurements in a group of close to 3,000 children ranging in age from seven months to 18 years. They compare these measurements to data in terms of whether or not their parents smoked and if these young people were actually exposed.

The researchers demonstrated a very strong relationship between early life exposure to parental cigarette smoke and risk for later overweight/obesity. This obesity was not only measured in terms of skinfold thickness but also looked at central obesity, the type that is associated with increased inflammation and risk for important issues like diabetes, coronary heart disease, and even Alzheimer’s disease.

The authors reported that the prevalence of overweight and obesity has more than doubled since 1980 and that this is certainly contributing to the development of non-communicable diseases like cardiovascular disease. Interestingly, the authors described how one mechanism whereby cigarette smoke exposure may relate to overweight and obesity occurs via what are called epigenetic mechanisms, meaning that early life exposure to cigarette smoke may actually change the expression of DNA in these young people. Indeed, they cite specific references that make a compelling case for this explanation.

Despite fully understanding the mechanism, the relationship seems clear. As the authors stated in their conclusion:

Exposure to parental smoking in childhood was associated with increased risk of overweight/obesity, central obesity and adiposity measured by skinfold thickness from childhood to adulthood. These findings highlight the importance of promotion of parental smoking cessation throughout their offspring’s childhood and adolescence as it might translate into healthy weight development trajectory among their children.

We don’t want young people to become overweight or obese, that’s for sure. And it is certainly valuable to emphasize the importance of dietary choices and physical activity as well as restorative sleep. But this research now identifies another important component that should be considered if we are to influence the health destiny of young people. While the mechanisms are not yet fully elucidated, nonetheless, the research certainly reveals a powerful relationship between early life cigarette smoke exposure and risk for weight gain.