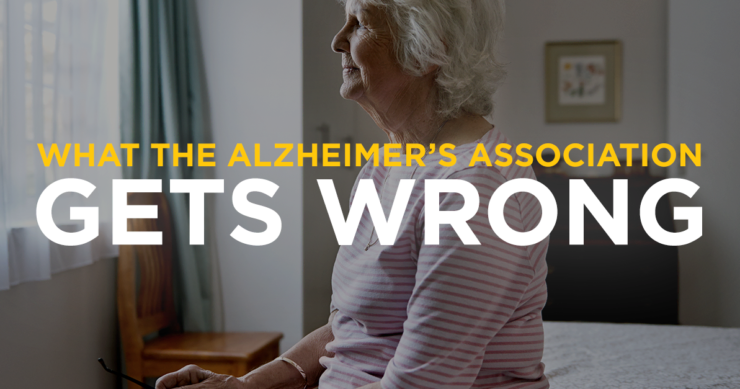 Today, in honor of Brain Awareness Month, I went to the Alzheimer’s Association’s web site to explore their “10 Way to Love Your Brain”, which include:

Fuel up right. Eat a healthy and balanced diet that is lower in fat and higher in vegetables and fruit to help reduce the risk of cognitive decline.

Really?  From what I’ve learned, we need more fat in the diet to protect the brain against dementia, not carbs at the expense of healthy fats. It even looks like the Mayo Clinic, publishing in the Journal of Alzheimer’s Disease, totally agrees.

Researchers reported the results of a study in which they explored the role of diet, as it relates to dementia risk. They followed a group of over 2,000 elderly individuals for close to 4 years and carefully monitored their dietary intake of protein, fat and carbohydrate. The subjects also underwent mental evaluations every 15 months to determine if they were developing any issues related to dementia.

The results of the study were impressive by any measure. The risk of dementia in those at the higher end of the scale, in terms of carbohydrate consumption, increased by close to 90%! Those whose calories came more from fat were found to have a reduced risk of developing dementia by around 44%.

In the discussion section of the report the authors call attention to other studies that relate these dietary parameters to brain health and function. They summarize research describing how reducing carbohydrate consumption is associated with reduced risk of mental decline. In addition, they point out results from the National Health and Nutrition Examination Survey revealing that a diet with a high percentage of fat is associated with better processing speed, learning and memory while lower processing speed was associated with a diet that favored higher carbohydrate foods. This information is important because beyond looking at risk for developing dementia, it relates diet to moment-to-moment brain function.

I’m hoping that the Alzheimer’s Association will quit it with this unfounded castigation of dietary fat. A diet that favors carbs and restricts fat increases inflammation, the cornerstone mechanism of Alzheimer’s disease, and this is, quite literally, like adding fuel to the fire.

Something You Should Buy for Better Brain Energetics
New Medication Associated with a 50% Risk Reduction for Dementia!
Support for Weight Training in Your Brain Program