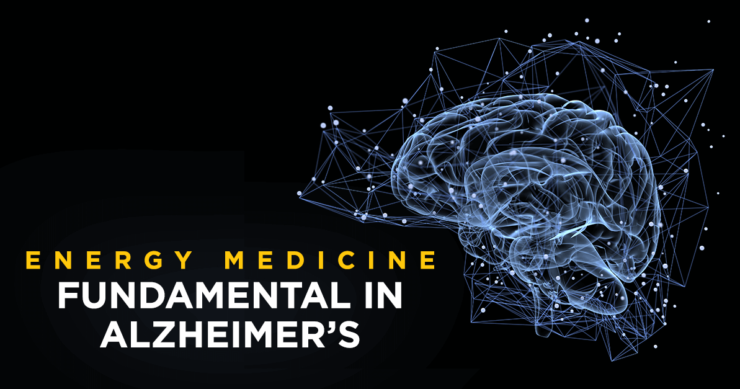 Energy medicine is now front-and-center as a major consideration in trying to unravel the mechanisms underlying Alzheimer’s disease. It’s now clear that a disruption of cellular energetics is fundamentally involved in the disease.

Multiple research studies have demonstrated that a decline in brain metabolism, specifically the brain’s utilization of glucose, is seen long before there are any clinical manifestations of Alzheimer’s disease. In other words, the first observable event in Alzheimer’s is the finding of reduced brain glucose utilization on a special type of brain scan. This observation presages the clinical manifestations like declining memory, judgment, and executive function by as much as several decades.

Why the brain suffers from this decline in its ability to use glucose as a fuel remains undefined, but new research is making the case that the hormone insulin is playing an important role in this event.

Insulin is a hormone secreted by the pancreas, and possibly also produced in the brain. It has multiple roles in human physiology. It regulates glucose and fat metabolism and also is involved in vascular regulation and cell growth. These functions obviously have implications as they relate to brain function. But as it relates to utilization of glucose, the role of insulin in brain health and function is pivotal. While the brain represents only about 2% of body, it is consuming an incredible 25%(!) of the body’s glucose, at rest. Clearly, the brain is energy hungry, and adequate insulin availability and function is required to satisfy brain energy needs.

Recently, researchers at Wake Forest School of Medicine in North Carolina published a report in the journal Frontiers in Aging Neuroscience in which they highlighted how insulin resistance may well contribute to the declining metabolism seen in Alzheimer’s disease. They described how individuals with metabolic dysfunction, like pre-diabetes or obesity, actually demonstrate improved brain glucose utilization when they were infused with insulin. Interestingly, the same researchers showed that this improvement did not occur in healthy individuals.

Further, they showed that while an acute, short-term increase in insulin actually improves memory function in humans and animals, long term elevation of insulin leads to insulin resistance, a condition in which brain cells are less responsive to the actions of insulin and there’s even a reduction of the amount of insulin that is able to make its way into the brain.

Chronic peripheral hyperinsulinemia leads to the downregulation of insulin transporters at the BBB (blood-brain barrier), which in turn decreases the amount of insulin that may enter (the) brain. This CNS insulin deficiency may potentially lead to impairments in memory, neuroprotective effects, synaptic transmission, as well as likely contributing to the development of neurodegenerative disease. Importantly, negative impacts of insulin resistance occur years prior to the development of clinically defined diabetes. Early defects in insulin signaling may be associated with pathologic brain changes even decades before clinical symptoms of the disease.

And beyond just affecting the energetics of brain function, the authors described several other mechanisms whereby insulin resistance could be harmful to the brain. They noted that insulin resistance is associated with inflammation, vascular dysfunction, dyslipidemia, and even an enhanced production of amyloid protein, the protein that is found to accumulate in the brains of Alzheimer’s patients.

Ultimately, however, these researchers remained focused on how insulin resistance impaired brain energetics. They revealed that insulin resistance actually compromised the function of the mitochondria and, importantly, how the recovery of brain cell function occurs when fat-derived fuel in the form of ketones became available. Ketones are made from dietary fat or body fat when they are metabolized in the liver. Our bodies increase their ketone production when we fast, restrict carbohydrate, or consume precursors like MCT or coconut oil.

In summary, insulin is critical for brain health and function. Insulin resistance happens when blood sugar is persistently elevated, even below the levels that would characterize diabetes. The effect of insulin resistance on the brain is an early event, often preceding the clinical manifestations of Alzheimer’s by decades. That means that people in their 30s and 40s need to pay attention to their diets in a big way. Diets high in carbs and sugar will increase blood sugar, increase insulin, and ultimately lead to insulin resistance. And that, as we have now learned, poses a serious threat to brain health.