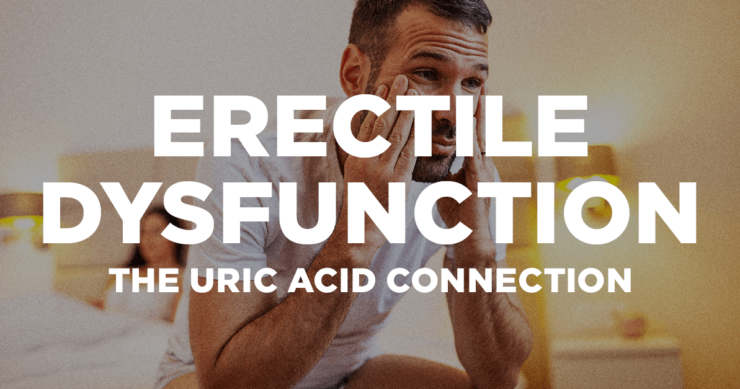 In medical research from around the world, important relationships are now being described between elevated levels of uric acid and a variety of threatening issues like diabetes, obesity, dyslipidemia, and high blood pressure. And as it relates to the latter, one important mechanism whereby increased uric acid can promote elevation of blood pressure has to do with an important molecule, nitric oxide (NO).

NO, among its many functions in the human body, plays a central role in allowing blood vessels to dilate or relax. This helps blood flow throughout the body and helps keep blood pressure from increasing. When NO has been compromised either in terms of its function or its formation, blood vessels can’t relax as readily and this leads to an increase in blood pressure while decreasing blood flow to our vital organs.

The process of erection requires adequate blood flow to the penis. And this requires the action of nitric oxide. In fact, this is how the popularly marketed drugs for erectile dysfunction work. They are designed to increase NO, and as such, improve penile blood flow.

Uric acid directly decreases nitric oxide function. And this mechanism is central to the relationship between elevation of uric acid and risk for high blood pressure, cardiovascular disease, and even type 2 diabetes.

With this understanding of uric acid and nitric oxide as well as the relationship between nitric oxide and erectile functionality, researchers set out to determine if there is a relationship between elevation of uric acid and erectile dysfunction. They evaluated 312 men with existing coronary artery disease. This group was chosen because, as one might expect, there is a much higher risk of erectile dysfunction when other organs are affected with vascular disease. In fact, 48% of this population was found to have erectile dysfunction on the standard sexual health inventory for men that was used in the study.

In addition, the researchers checked the serum uric acid values in all the participants. The results showed a significant increased risk of erectile dysfunction in men who not only had chest pain, presumably of cardiac origin, but who had higher uric acid levels as well. When the results were not adjusted for other cardiovascular risk factors, the study revealed an increased risk for erectile dysfunction of 31% for every increase of 1 mg/dl in the uric acid value.

Now that we’ve learned so much about uric acid’s mechanisms that threaten our health, we should look upon this information as offering up solutions to some of our health challenges. As these authors concluded, lowering uric acid may well be beneficial for erectile dysfunction.

The good news is that lifestyle choices can go a long way towards bringing uric acid under control as I discuss in my next book, Drop Acid.