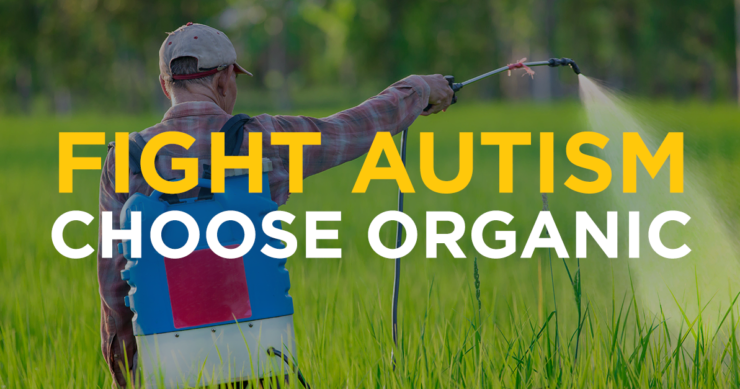 Brain scientists are at a loss when it comes to trying to explain to the general public why we are seeing a profound, and ever-increasing, incidence of autism spectrum disorder. Obviously, although there may be some genetic predisposition for autism spectrum disorder, it is not primarily a genetic disease. If it were, we wouldn’t see such a sudden and dramatic increase in the number of children being diagnosed.

So we have to turn our attention to things extrinsic to our genetics. That means, we’ve got to pay attention to factors in our environment that can be having a detrimental effect upon brain development and function.

In a recent report, Neurodevelopmental Disorders and Prenatal Residential Proximity to Agricultural Pesticides: The CHARGE Study, highly respected researchers from the Department of Public Health Sciences, University of California, in collaboration with other institutions, described their extensive research, known as the CHARGE study (Childhood Autism Risks from Genetics and Environment).

In this extensive research project, the scientists attempted to determine if there was any relationship between childhood developmental disorders, autism spectrum disorder, and exposure to environmental toxins, specifically commercial pesticide application, in the state of California. They look at the odds of a child being diagnosed with either of these disorders in comparison to “typical development” and compared the incidence of these events with the proximity to commercial pesticide application where mother lived during pregnancy.

The study looked at the most commonly used commercial pesticide groups, including organophosphates, organochlorines, pyrethroids, and carbamates.

In their report, the researchers revealed that living within 1km (just under 1 mile) of an agricultural pesticide application was associated with an incredible 60%(!) increased risk for a child being diagnosed with autism spectrum disorder. In fact, if an expecting mother was exposed during her third trimester, the risk was was actually doubled. Another commonly used pesticide, chlorpyrifos, was actually associated with a tripling of the risk for autism spectrum disorder if mothers were exposed during the second trimester.

Here’s what the authors concluded:

Children of mothers who live near agricultural areas, or who are otherwise exposed to organophosphate, pyrethroid, or carbamate pesticides during gestation may be at increased risk for neurodevelopmental disorders. Further research on gene–environment interactions may reveal vulnerable subpopulations.

According to a new government survey of parents, the prevalence of autism spectrum disorder in children ages 3-17 is now pegged at one in 45. Even the more conservative estimate, from the Centers for Disease Control, puts the prevalence at 1 in 68. These are well-respected institutions that are sounding the alarm that a virtual epidemic is occurring in America, and aside from releasing these statistics, it really seems like no one is listening.

There is no treatment whatsoever that has merit when it comes to autism spectrum disorder. That said, we’ve really got to do everything we can to pay attention to information that points to possible environmental causes, especially because this information offers us up the opportunity to make changes.

One of the most important ways that we can vote is with our wallets, by choosing to buy foods that are organic. Ultimately, this simple choice may move the needle in favor of decreased pesticide usage. This seems even more urgent now that we see published science connecting the dots between pesticide exposure and our children’s health.

Is Alzheimer’s Disease “Old-Timer’s” Disease?
If Fructose Is So Bad – Should I Eat Fruit?
Early Life Cigarette Smoke Exposure and Future Weight Gain