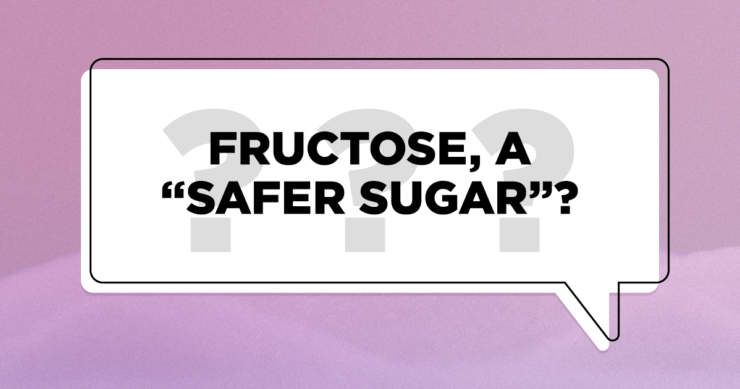 Lately, in an apparent attempt to push back from the negativity surrounding high fructose corn syrup, there seems to be an increase in the number of articles published touting the advantages of fructose as a “safer sugar.” The main point that is so often emphasized is that unlike glucose, fructose does not seem to increase insulin. Increasing insulin, which is how our bodies cope with increased glucose levels, may, when it’s constantly challenged, lead to a state in which we tend to lose our sensitivity to insulin. This means that with time, on a diet that constantly raises our glucose levels, insulin becomes less effective. Losing insulin sensitivity or becoming “insulin resistant” is not only associated with elevated blood sugar and subsequent diabetes, but also a fairly extensive list of chronic degenerative conditions that we want to do our best to avoid like coronary artery disease and Alzheimer’s.

So is it reasonable to assume that favoring fructose, because it doesn’t impact insulin sensitivity, is a good idea? To answer this question, researchers at multiple institutions collaborated in a research study involving 29 participants, 40-72 years of age with a body mass index (BMI) of 25-35 kg/m2. This level of BMI corresponds to being overweight or obese. The subjects all reported no change in their body weight for the 6 months prior to the study.

During a 10 week period, the subjects consumed either fructose- or glucose-sweetened beverages each day that supplied 25% of their daily calories.

The study, published in The Journal of Clinical Investigation, evaluated a whole host of metrics that are valuable in terms of disease risk. The findings were quite revealing. In the fructose consuming group in comparison to the glucose group there were marked changes in various lipid parameters that are associated with increased risk for cardiovascular disease including small dense LDL, oxidized LDL, and even cholesterol itself. Further, not only did the fructose consumers produce more body fat in total, they also produced significantly more “visceral fat,” the kind that’s associated with increased inflammation. And again, these findings were the observation in those consuming the “safer sugar.”

But most compelling, at least in terms of disease risk, was the fact that the fructose consuming group demonstrated a significant increase in insulin resistance in comparison to the glucose group. In those who added the fructose beverages, insulin being generated by the pancreas increased by 10.2% in contrast to the 2.9% seen in the glucose consumers and this effect was more pronounced in women. Higher insulin levels pave the way for insulin resistance and that’s a recipe for health consequences.

This study, like many others, challenges the notion that fructose should be our sugar of choice. The pervasive practice of adding high fructose corn syrup as a sweetener to so many foods and beverages isn’t a choice made by food manufacturers with your health in mind. And I will leave it to the reader to speculate as to why this practice continues.

And finally, by all means please don’t conclude from this review that glucose is necessarily a good choice. Keeping our blood sugar, insulin levels, body fat, and lipid parameters where they need to be for health and longevity will all be facilitated when sugar, in all its various forms, is recognized for the health threats that it poses.