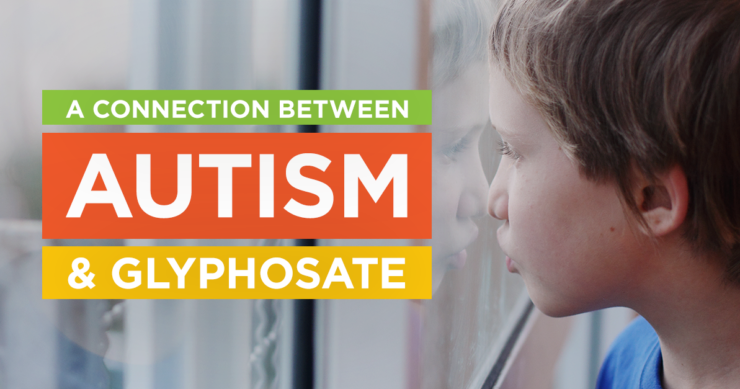 According to the Centers for Disease Control and Prevention (CDC) the prevalence of autism continues to rise here in America. Their surveillance study identified autism spectrum disorder in an incredible 1 in 68 children (1 in 42 boys and 1 in 189 girls).

Clearly, no one yet knows the cause of autism, but more and more research is pointing to the possible connection between autism risk, and exposure to the herbicide glyphosate, the active ingredient in the common weed killer Roundup.

Take a look at the graph below (source) that correlates autism prevalence (yellow bars) with glyphosate usage on corn and soy (red line): Glyphosate has made its way into our food supply, as about 90% of all corn and soy, as well as a significant amount of wheat, are treated with this toxic chemical.

In a new report, published in February of this year, Dr. William Shaw describes a group of triplets, two male children with autism, and one female child with a possible seizure disorder. All three children were found to have dramatic elevation of their urinary glyphosate levels, and additional laboratory studies showed that their mitochondria, the energy producing parts of their cells, were not working properly. The author goes on to talk about sources of glyphosate, indicating that glyphosate is found in many GMO foods. It turns out that this family was eating a lot of corn tortillas, and, as we all now know, almost all of the corn available here in America is glyphosate-laced.
There is strong epidemiological data that correlates increased usage of glyphosate with an increase in autism rate. Further, one popular theory states that glyphosate induces significant changes in the bacteria that live in the human gut. As Dr. Shaw states:

The changes that are brought about in the gut lead to changes in the presence of various chemicals that may go on to damage how mitochondria work, and this can certainly manifest as changes in behavioral activity. What Doctor Shaw was able to demonstrate was that there was a remarkable improvement in the various laboratory studies of these children once they went on a diet that focused on foods that did not contain glyphosate. In fact, there were some improvements reported by the patients’ mother. Dr. Shaw concludes his study by making the following observations:

The presence of high amounts of glyphosate in the urine samples of the severely affected children in the current study, who had been eating nonorganic food, calls into question the wisdom of distributing GMO foods dependent on glyphosate usage throughout the world while essentially eliminating
non-GMO foods.

Again, keep in mind that the main reason we have GMO corn, soy and other crops is to allow farmers to spray them with glyphosate, killing the weeds and preserving the plant – while poisoning our food. And it is for this reason that I remain so passionate about choosing non-GMO whenever possible.