Grain-Fed vs Grass-Fed and Finished Beef — Why Does it Matter?

Grain-Fed vs Grass-Fed and Finished Beef – Why Does it Matter? 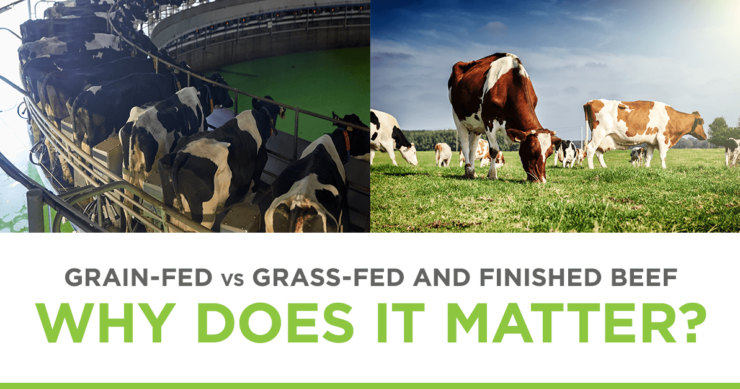 Americans eat a lot of meat. In 2018, the United States Department of Agriculture projected that the average person would consume over two hundred pounds of chicken, pork, and beef by year’s end. That’s more than half a pound daily per capita, every day of the year! While it is possible to consume an omnivorous diet and maintain a healthy lifestyle, we recommend viewing meat as a garnish or side dish rather than the focus of your meal. The perfect plate is full of colorful, above-ground leafy vegetables and healthy fats, and if you choose to eat meat, then a three-to-four ounce serving of meat. However, it’s very important to remember that not all meat is created equally.

One of the most important factors in determining the overall quality of meat—especially red meat—is the dietary patterns of the livestock that produced it. When you think about it, this makes perfect sense: the food an animal consumes is used by their body to grow and develop, and, ultimately, becomes the very food that we consume. Feeding cattle a nutrient-poor diet will, in turn, produce a nutrient-poor food source, compared to cattle fed a natural, nutritious diet.

As it turns out, the age-old adage “You are what you eat” applies to cattle, too!

Grass-Fed and Finished vs. Grain-Fed Cattle

A significant portion of meat consumed in Western countries comes from animals raised on unnatural, grain-based diets in massive industrial feedlots, with the aid of antibiotics and growth hormones. This approach to animal husbandry produces meat that is significantly higher in inflammatory omega-6 fatty acids. Because inflammation underpins the pathogenesis of so many of the diseases we face, sourcing high quality protein is critical in the context of a healthy diet and lifestyle.

Generally speaking, bovine dietary patterns can generally be split into two groups: grass-fed and grain-fed. It’s important to note that grass-fed does NOT necessarily mean that the cow is grass-finished. You should be wary of beef that can make the “grass-fed” claim, but not “grass-finished”. We explain the nuances of these definitions in this blog post.

In the United States, all calves generally begin their lives the same way, regardless of whether or not they will ultimately end up producing grain- or grass-finished meat. For the first seven months of their lives, they subsist on a combination of their mother’s milk and the grass and plants available to them in their immediate environment. Between seven and nine months old, however, industrially-raised cattle are moved to enormous feedlots, where they are kept in confined stalls and hastily fattened with soy- or corn-based feed. In dire straits, some farmers have even resorted to supplementing what grain they can afford with stale candy to lower their feed costs. Grain-fed cows are also usually pumped full of medications, including antibiotics and growth hormones, to maximize the profitability of their eventual slaughter.

On the other hand, grass-fed and finished cows spend their lives foraging for the grass, plants, and edible flowers that surround them in open-range pastures, as they did for centuries before the advent of industrial farming. Because these cows are eating and roaming as nature intended, they do not require growth hormones and antibiotics to thrive and survive like their grain-fed counterparts. Furthermore, these cows live far more humane and environmentally-friendly lives than their industrially-raised brethren. While many industrial farmers will challenge the notion that grass-fed cows have a lower environmental impact than their grain-fed counterparts, the reality is that raising grass-fed cows requires fewer antibiotics and harmful agricultural chemicals, and does not create the massive concentrations of waste that a feedlot produces. The fact that these cows live more humane and environmentally-friendly lives does not necessarily impact the nutritional value of their meat, but we believe that these factors should absolutely be considered in a decision about which type of beef to consume.

What Difference Does It Make?

Why does grass-fed and finished really matter?

In short, the meat sourced from grass-fed cows is far more nutritious, beneficial, and environmentally friendly than the meat sourced by grain-fed cattle, which has skewed nutrient profiles and is full of harmful chemical by-products from the industrial cattle-rearing process. Grain-fed cows produce meat that is both dramatically higher in inflammation-producing omega-6 fats and deficient in healthful omega-3s. This is doubly harmful considering the ratio of these compounds is actually more important than their absolute levels in the blood. Generally speaking, Americans consume a disproportionate amount of omega-6s, relative to omega-3s. Furthermore, because grass-fed and finished cows are not exposed to the suite of hormones and medications that their grain-fed counterparts are, the meat they produce doesn’t contain the toxic remnants of these unnatural components from the industrial, grain-based process.

Another, more recent, study echoed and expanded on the earlier findings of the Australian team. Looking at beef specifically grown in the United States, researchers analyzed meat samples across multiple states and found that meat from grass-fed cows had significantly higher levels of conjugated linoleic acid and omega-3 fatty acids, mirroring the Australian study’s results. However, this team went one step further, determining that grass-finished beef also contained more carotenoids , trace nutrients, and saturated fat, while carrying no more cholesterol or polyunsaturated fats than grain-fed cows.

When it comes to choosing meat, it is critically important to consider the source. The food that livestock eat dictates their relative health, and this ultimately travels up the food chain and determines what health benefits—or detriments—we absorb when eating that meat. When it comes to choosing between grain- and grass-fed beef, the choice is clear!

When speaking about the nuances in choosing the highest quality meat, we receive many questions from folks who struggle to find grass-finished, antibiotic free, beef in their local supermarkets. For these people, I always recommend the company that I trust to deliver high-quality beef, ButcherBox. I’ve partnered with ButcherBox to provide exclusive offers to our community for those that are interested. They take the guesswork out of meat sourcing and better yet, deliver right to your door!

You can check out the latest offer for the Empowering Neurologist community here.