The Hidden Dangers of E-Cigarettes 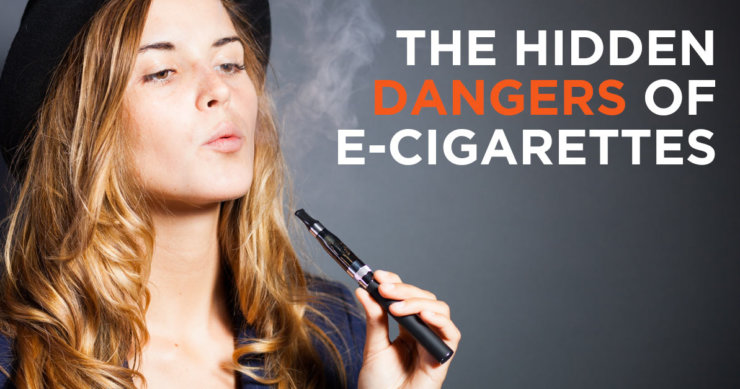 Electronic cigarettes, commonly known as e-cigarettes, are a relatively new phenomenon, becoming increasingly popular over the last several years. A recent study by the CDC shows that from 2011 to 2013, the number of never-smoking youth who tried e-cigarettes tripled from around 79,000 to over 263,000.  E-cigarettes are marketed as a better alternative to traditional cigarettes, but as a new product, data regarding the health effects of these cigarette substitutes has taken time to catch up. However, recent analysis on the chemicals contained in the e-cigarette shows why it’s likely best to avoid the products entirely.

Unlike traditional cigarettes, e-cigarettes are loaded with a vaporizable liquid. This fluid is made up of a number of chemicals, among them propylene glycol, glycerol, nicotine and a variety of flavoring substances. While these chemicals don’t sound entirely appealing, the new research shows that the real danger may be in how these compounds change when heated.

To use an e-cigarette, you load the liquid and apply electricity, heating the liquid until it vaporizes. At this temperature, the chemicals inside the fluid undergo a breakdown process and are converted into other chemicals. Using an advanced measurement system called nuclear magnetic resonance spectroscopy, scientists examined the new chemicals, and in the process, found a particularly concerning result.

Though e-cigarettes are still new, this initial data should be seriously considered. Even if there appear to be benefits to switching from traditional cigarettes to an electronic version, the long-term health consequences of this new alternative are far from fully understood, and this preliminary information indicates that the effects could range from less than safe to extremely dangerous. The verdict on whether e-cigarettes are better or worse than traditional cigarettes remains to be concluded, but if possible, staying away from these new products seems to be the safest option.