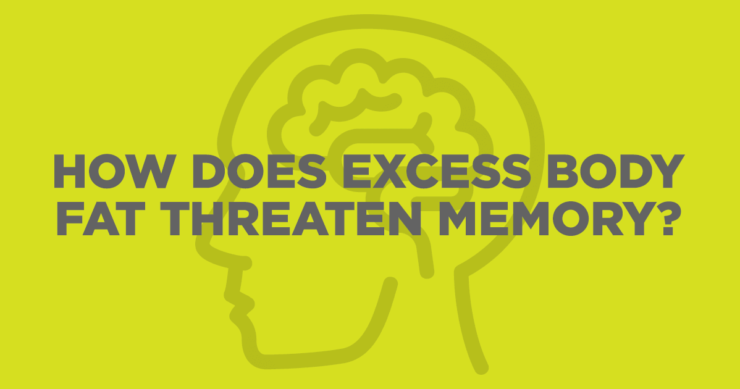 In the past, I have written several blogs discussing the relationship of body measurements like body mass index (BMI) to cognitive function, as well as relationships between what is called the waist-to-hip ratio with atrophy of the brain. Another important relationship that we have explored extensively in the past is the connection between excess body fat and inflammation.

So, one might wonder if the mechanism whereby obesity relates to declining cognitive function, like worsening memory, may be mediated by inflammation. Basically, the question I am asking has to do with connecting these dots.

Authors publishing in Brain, Behavior, and Immunity set out to answer this question. Given that obesity is frequently accompanied by lower working memory (the type of memory that is required to keep relevant information in mind) and that it is this specific type of memory that allows people to stay on a weight management program, understanding this relationship has important implications for people who want to lose weight.

This large study, with over 11,000 participants between the ages of 25 and 34, measured their inflammation status using a standard marker, C-reactive protein (CRP). Working memory, again a description of the type of memory that’s used to keep things in mind, was evaluated using a test that measured how many numbers could be remembered and then repeated in the opposite order in which they were presented. Finally, BMI was chosen as a validated marker of obesity.

The researchers found, as expected, a strong correlation between both BMI and the marker of inflammation, CRP, with lower working memory. But what was most intriguing about their study was that the powerful relationship between BMI and declining memory seemed to be mediated or highly influenced by the level of CRP.

Our results therefore point to inflammation as playing an important role in the relationship between obesity and working memory, and suggest that interventions aimed at reducing inflammation may help lessen the cognitive burden of obesity.

This is an interesting statement on so many levels. First, as the authors proposed, if inflammation could be limited in obese individuals, it might help to preserve brain function. Strategies to lower inflammation, aside from weight loss, could include various nutraceutical products like fish oil, magnesium, turmeric, and probiotics, as well as dietary changes including identification and reduction of potential food allergens, reducing sugar, and increasing fiber to nurture the microbiome.

In addition, another important takeaway would be that this research supports the detrimental role of inflammation in and of itself, in other words, inflammation that is not necessarily associated with obesity.

Many mechanisms can explain how inflammation can threaten memory. We know that inflammation enhances the production of the hormone cortisol, and cortisol is specifically toxic to the cells in the hippocampus, the area of the brain that is fundamentally important for memory. In addition, the chemical mediators of inflammation called cytokines may have direct effects on another part of the brain, the prefrontal cortex, which is also involved in memory function.

So, chronic inflammation is something to be avoided as it has been associated with coronary artery disease, cancer, type II diabetes, obesity, and, as just described, memory dysfunction. This study calls attention to the mechanistic relationship between obesity and problems with memory, and makes it quite clear that inflammation is playing a central role.