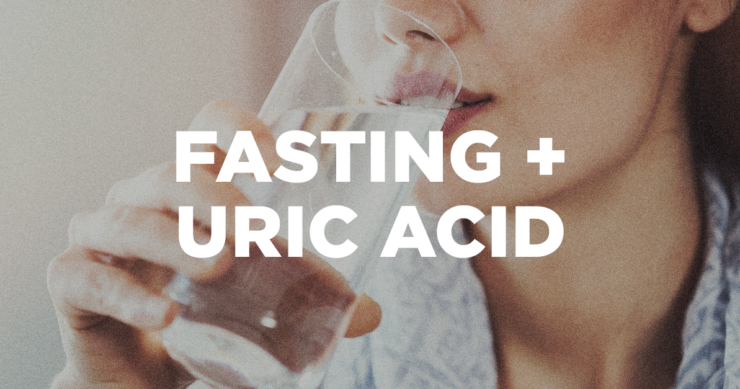 As we explore in Drop Acid, in many ways uric acid serves as an alarm signal in the body, alerting metabolism that food is scarce. As such, elevation of uric acid serves to preserve body fat, increases the genesis of glucose to power the brain to increase the likelihood that the starving individual might find food, and even increases blood pressure, which would be helpful during times of water scarcity.

So, it’s not surprising that fasting seems to elevate uric acid. This elevation has been seen in multiple studies and it’s certainly understandable. During fasting we begin to break down proteins and utilize amino acids for fuel. It is the process of catabolic breakdown of proteins that liberates chemicals called purines, the breakdown products of both DNA and RNA. Purines are directly metabolized to form uric acid. In fact, there are only three things that contribute to uric acid formation, and they include purines, alcohol, and by and large the greatest source these days, the sugar fructose.

There are powerful health-enhancing benefits of fasting and we have been supportive of it for many years, always with the recommendation that it is done in conjunction with consultation with a healthcare provider. Fasting improves blood sugar, insulin sensitivity, lipid profiles, and is even associated with a reduction of c-reactive protein (CRP), meaning it has a beneficial effect on inflammation.

What the scientific literature reveals is that, first, fasting does indeed increase uric acid. Secondly, following a fast, uric acid rapidly returns to its pre-fasting status. The implication of this finding is that we can in fact reap the benefits of intermittent fasting without incurring any risk from elevation of our uric acid in the long term.

This was recently demonstrated in a case report that evaluated multiple parameters during short-term intermittent fasting for weight loss. The researchers studied the effects of an intermittent fasting program for weight loss in which two days of complete fasting (water allowed) were followed by five days of normal eating. And this cycle was repeated three times. A variety of measurements were evaluated in the study including body weight, body fat ratio, blood pressure, blood glucose, and yes, uric acid.

The results of the various parameters are found in the study, but as it relates to uric acid, it increased quite significantly early on. Uric acid increased from 7 mg/dL up to 9.7 mg/dL in just seven days. Interestingly however, even during the fasting period, uric acid tended to trend back down. When the fasting was complete, five weeks after the beginning of the trial, the uric acid level was back to its baseline. This has been an observation in multiple other studies as well.

So, it looks like we can absolutely participate in the benefits of a fasting protocol without risking elevation of our uric acid once that fasting protocol has ended. And indeed, the idea of fasting for a period of time and then resuming sensible eating is inherent in the term intermittent fasting.

The take-home message here is that during a period of fasting, one might expect to see a jump in uric acid level. Research makes it very clear that this elevation will soon return to baseline while the benefits of the fasting protocol may well persevere.