If Fructose Is So Bad - Should I Eat Fruit? - David Perlmutter, MD

If Fructose Is So Bad – Should I Eat Fruit? 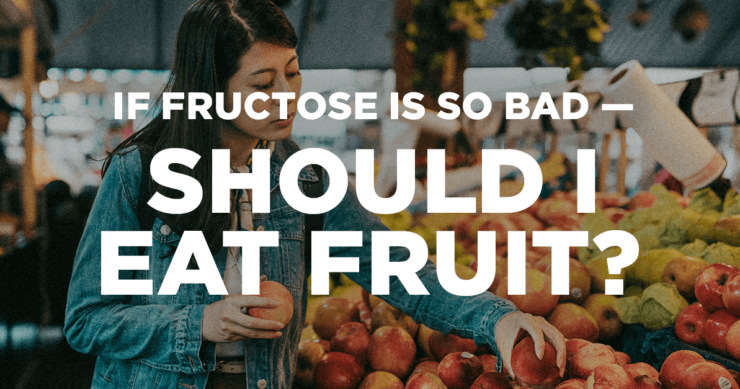 With all the nuances of dietary recommendations from keto to paleo to vegan to who knows what else, one thing is clear: there is absolutely no need for added fructose, or any sugars for that matter, in the human diet. And there is an ever-expanding body of research that clearly points out the incredible threat that fructose poses to human metabolic health. Fortunately, many people are getting this message and doing what they can to almost eliminate, or at least substantially reduce the amount of fructose that they consume.

Among the highest sources of fructose in the human diet are sugar-sweetened soft drinks and fruit juices. Statistics are clearly demonstrating that consumption of these beverages, at least here in America, is declining, no doubt because of the increasing recognition of the health threat posed by fructose.

But what about fruit? After all, the name fructose is derived from the Latin for fruit (fructus) coupled with -ose, the chemical suffix used for sugars. This question was explored in a recent Mayo Clinic Proceedings publication entitled Added Fructose: A Principal Driver of Type 2 Diabetes Mellitus and Its Consequences authored by my friend James DiNicolantonio, PharmD.

The paper begins by calling out the fact that human consumption of fructose has always been a rare event until quite recently, stating:

Whereas fructose in Paleolithic times was likely encountered only rarely and seasonally (at least in populations living in non-tropical climates) in low concentrations as ripened fruit, fructose today is ubiquitous in all seasons and encountered in high concentrations in processed foods.

The authors go on to say that even though fructose is indeed naturally found in various whole foods including fruits and vegetables, consumption of these foods does not pose a problem for human health in that their consumption is protective against things like diabetes and other cardiometabolic issues. Further, they described how consumption of whole fruits and vegetables is associated with reduced premature mortality. They indicate that this difference may be a matter of dose and context whereby natural foods actually contain significantly lower concentrations of fructose, and fructose is delivered along with water, fiber, antioxidants, and various other whole food constituents. This stands in contrast to the delivery method for fructose through highly processed foods so typical in the standard American diet.

A more detailed look at the impact of dietary fruit in terms of its potential threat for diabetes was provided by researchers in a study put out by the Harvard School of Public Health. This report summarizes the results from three prospective longitudinal cohort studies that evaluated over 170,000 individuals and collected data that described the foods that they consumed in relationship to whether or not they developed type 2 diabetes over several years. Of particular interest is the fact that they were able to make comparisons between fruit juice consumption and consumption of whole fruits and relate this difference to diabetes risk. The study reported:

And concluded by stating:

The immediate metabolism of fructose does not impact insulin levels. Nonetheless, fructose ultimately does impact the functionality of insulin and, when repeatedly consumed, can set the stage for insulin resistance whereby insulin is less effective. This happens as a direct effect of increased fructose in the liver cells, and is also made worse by the fact that insulin increases uric acid in the body, which further compromises the effectiveness of insulin and therefore can lead to type 2 diabetes.

So, the important message then, as it relates to diabetes and other aspects of metabolic syndrome, is to dramatically reduce fructose consumption, especially as it is found in various beverages and processed foods. Also, keep in mind that fruit consumption, despite the fact that fruit does contain small amounts of fructose, up to three servings per day is actually associated with lowered risk of type 2 diabetes. And it’s valuable to understand that unlike consuming the fructose found in these beverages, eating fruit does not elevate uric acid.