Implications of the Alzheimer's Gene, APOE4, in Children

Implications of the “Alzheimer’s Gene” in Children 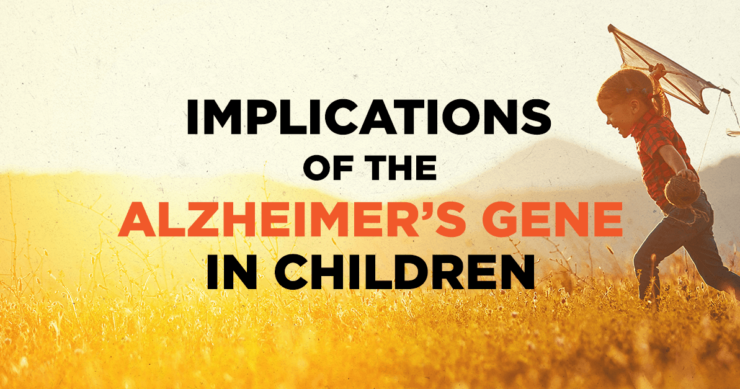 The development of highly accurate and widely available genome sequencing technology has put us at a crossroads. Now, more than ever, the divergent views of nature versus nurture confront consumers wishing to be advocates for their own health. As we learn about our genetics it seems quite clear that the deterministic message about our health destiny is ringing loud and clear. More and more, the idea that we are at the mercy of our inheritance seems supported by the advancing understanding and interpretation of our individual genetic profiles.

An important message we have been espousing over the past decade centers on the importance of lifestyle choices, specifically directed to offset disease risk that may well be enhanced by genetics. This ideology centers on the notion of genetic predisposition in contrast to genetic determinism. It is this contrast that opens the door to empowerment and your health destiny.

One genetic risk factor that’s getting a lot of attention is the E4 allele of APOE. We each carry two of the APOE genes, and they can be numbered 2, 3 or 4. Genetic testing revealing that one or both APOE alleles is E4 does indicate that that individual carries an increased risk for cognitive decline and, specifically, Alzheimer’s disease. But carrying the APOE4 allele absolutely does not mean that cognitive decline or Alzheimer’s disease is definite. Lifestyle choices, which, unlike our genetics, can be modified, play an extremely important role in either enhancing the likelihood of dementia, or providing a measure of protection against the notion of “bad genes.” This message remains a central theme of our outreach.

Recently, researchers publishing in Neurobiology of Aging revealed that the APOE4 allele has implications well beyond dementia risk in adults. Dr. Chandra A. Reynolds, and her team at the University of California, performed various assessments of cognitive performance in a group of 1,321 children and adolescents at either age 7, 12, or 16 years. In addition, these participants underwent genetic analysis specifically looking at their APOE status.

The results were quite remarkable. Children and adolescents who carried the APOE4 allele, the so-called “Alzheimer’s gene,” showed measurably lower scores on verbal, performance and full-scale IQ assessments in comparison to those not positive for this genetic marker.

In discussing the observed IQ difference between APOE 4 carriers and non-carriers the authors stated:

In terms of clinical relevance, a difference of a few points, while small, may be potentially relevant in terms of cognitive reserve for which any disadvantages could become magnified later in adulthood.

This is crucial as it may open the door for targeting children who are APOE4 positive with proven, brain-defensive strategies as a way of safeguarding them against devastating cognitive issues in adulthood. Some important actions along these lines for APOE4 children might include restriction from contact sports, more judicious dietary control of blood sugar, targeting elevated homocysteine with appropriate B vitamins, supplementing the diet with the omega-3 DHA, and creating the best environment to favor higher education.

These lifestyle choices and many others offer up a powerful antidote to what may be considered unfavorable genes. But that said, why restrict these brain defensive strategies to only the 14.5 % of children, and adults, who are APOE4 positive? Indeed, cognitive decline and even Alzheimer’s disease itself do occur even in people who are not APOE4 carriers.

It is, no doubt, helpful to know as much as you can about your genetics. But understanding how valuable our lifestyle choices are in determining health destiny, despite genetic predisposition, is an unparalleled dose of empowerment.