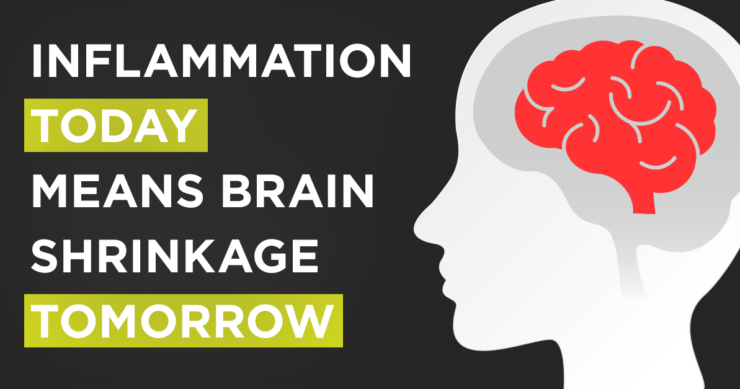 As I have emphasized over the past decade, the fundamental mechanism that underlies neurodegenerative conditions, including Alzheimer’s disease, Parkinson’s disease, multiple sclerosis, and other issues (think diabetes, coronary artery disease, and even cancer), is the process of inflammation. We’ve got to do everything we can in terms of our lifestyle choices to bring inflammation under control. Dietary choices like choosing to limit sugar and carbohydrates, avoiding gluten, eliminating vegetable oils (corn oil, sunflower oil), increasing intake of healthful fats (olive oil, avocado oil, nuts and seeds), and favoring fiber-rich foods, are all fundamental building blocks of a lifestyle that helps to reduce the risk for excess inflammation.

Degree of inflammation is, to a significant degree, determined by the health and diversity of gut bacteria. So issues that threaten gut bacterial diversity, like stress, artificial sweeteners, and  acid-blocking medications, pave the way for increasing inflammation. This threatens your long-term healthy by raising your risk of virtually all those chronic degenerative conditions you don’t want to get.

It doesn’t make sense to wait until you’re having an issue with one of these diseases to begin a program designed to reduce inflammation. This notion was powerfully supported in a recent study published in the journal Neurology. In this report, researchers from multiple institutions endeavored to determine if inflammation in midlife would have any consequences for the brain later in life.

They studied a group of 1,633 participants (with an average age of 53) by looking at their blood levels for various markers of inflammation. These five inflammatory markers were compiled into what was called the “inflammatory composite score.”

After 24 years, the participants underwent a special brain scan to measure the size of various areas of the brain. The study revealed a marked correlation between midlife elevation of inflammatory markers and reduction in size of key brain areas including the hippocampus, the brain’s memory center. The relationship between these inflammatory markers and shrinkage of the brain later in life was modified by age and race in that younger participants, as well as Caucasian participants, with higher levels of inflammation markers in midlife were more likely to show reduced brain volumes during the follow-up.

“Our prospective findings provide evidence for what may be an early contributory role of systemic inflammation in neurodegeneration and cognitive aging.” The important take-home message here is in line with John Kennedy’s statement: ‘The time to fix the roof is when the sun is shining.’

That means that we should be doing everything we can to reduce inflammation TODAY, long before some chronic degenerative condition manifests. In this study there was a clear correlation between elevation of markers of inflammation and risk for shrinkage of the brain, and who wants that? This is what preventive medicine is all about. It’s about doing the right things today to pave the way for a healthier tomorrow.