Is Coconut Oil Still Healthy? The Truth Behind The Recent Headlines. 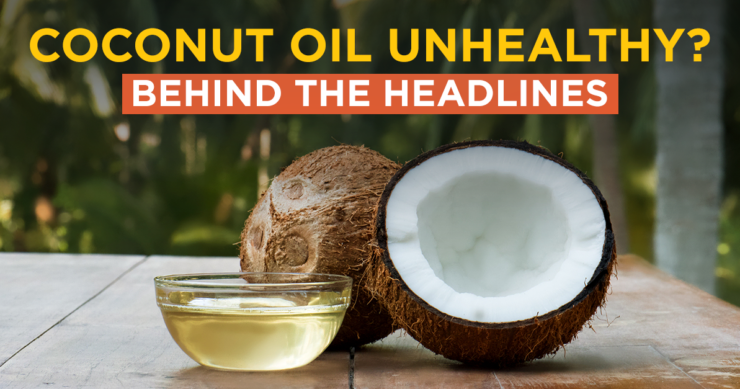 You may or may not have seen the American Heart Association’s (AHA) latest report, but I’m sure you’ve probably seen the social media frenzy that followed their statements on coconut oil.

An article by USA Today with the headline “Coconut Oil Isn’t Healthy, It’s Never Been Healthy”, has been shared over a half a million times. The AHA rehashed their age-old dietary guidelines for fats and cholesterol, attempting to finger them both as the cause of cardiovascular disease (CVD). But this time they took it one step further and took a stab at coconut oil, stating:

However, because coconut oil increases LDL cholesterol, a cause of CVD, and has no known offsetting favorable effects, we advise against the use of coconut oil.

So what’s going on here? Is coconut oil suddenly not as good for you as we once thought? Or, is the AHA report based on erroneous science?

If you suspect that there’s more to the story than “coconut oil is bad” and “the American Heart Association is confused”, you’re right.

It’s not that simple. But it’s the AHA that is oversimplifying the situation. And on top of the curious attack on coconut oil, the AHA recommended eating more corn and soy oil, which is downright dangerous and flies in the face of what our most respected nutritional researchers are telling us.

All Cholesterol Is NOT Bad for You

This report implies that cholesterol is “bad” and, as all of you know, this is erroneous.

It’s important to differentiate between LDL and HDL cholesterols. LDL is considered the “bad” cholesterol and HDL is considered “good” cholesterol. But it’s actually oxidized LDL that we should be concerned about. When you’re eating a highly inflammatory diet, causing LDL cholesterol particles to react with free radicals in the body, the oxidized LDL becomes reactive and damages surrounding tissues. In addition, glycation, the binding of LDL or any other protein in the body to sugar, also enhances their oxidation.

More importantly, your HDL and LDL cholesterol ratio is an even better indicator of your overall health (including your CVD risk). In its report, the AHA vastly overlooked HDL cholesterol levels and HDL to LDL ratios.

The AHA even claims at one point that:

changes in HDL cholesterol caused by diet or drug treatment can no longer be directly linked to changes in CVD, and therefore, the LDL cholesterol-raising effect should be considered on its own.

This is the classic and outdated mistake of taking one aspect of health, examining it outside of the context of the entire system (the body), and then trying to make sense of the incomplete data. We know this method is nearsighted. Studies have shown that HDL cholesterol reduces the risk of CVD, so it’s a mystery as to why the AHA would ignore it. Removing HDL from the equation and failing to acknowledge the HDL to LDL ratio paints a partial picture.

Completely ignoring the fact that we know CVD is not caused by fat buildup in the arteries but by inflammation of the body, the AHA continues to point the finger at LDL cholesterol.

Cholesterol is a fundamental component of every cell membrane in the body, including, most importantly, the membranes of your brain cells. In fact, 25% of your body’s cholesterol is found in your brain. Your body needs cholesterol to support good neurological health. In my book, Grain Brain, I dive deeper into the best diet for optimal brain performance and reducing the risk for illnesses such as dementia, ADHD, anxiety, chronic headaches, depression, and more.

The war on cholesterol is extremely unfortunate because this misinformation is actually making people sick. Not only is cholesterol necessary for a healthy body and mind, but coconut oil nourishes the brain and supports the right kind of cholesterol your body needs.

Saturated Fats Do NOT Cause Cardiovascular Disease

Somehow, the fundamentally flawed hypothesis, that saturated fat causes cardiovascular disease, became the prevailing belief in the 1950s. This notion has had tremendous staying power even though there are numerous studies indicating that saturated fats do not lead to CVD.

In fact, one 2014 study even urged the AHA to consider the evidence that saturated fats may be beneficial when updating their future guidelines. Seems they missed the memo.

If the culprit behind CVD isn’t saturated fat, what is?

Inflammation is what causes cardiovascular disease.

If you want a healthy heart, you need to focus on a diet that reduces inflammation and oxidation. This means reducing processed foods, sugars, and simple carbs. Also, be sure you’re eating healthy sources of saturated fats like grass-fed butter, grass-fed beef, and, you guessed it, coconut oil.

Coconut oil – as with most healthy fats – does not necessarily need to be restricted.

The AHA report recommends that daily saturated fat intake should be about 6% of your daily caloric consumption, or about 2 tablespoons of coconut oil for men and 1.3 for women. This would be hard to exceed, unless you were on a ketogenic diet.

Though they didn’t completely eliminate saturated fats from their recommendations, the AHA further mislead their audience by recommending polyunsaturated vegetable oils over coconut oil and other saturated fats, and this is unforgivable.

Vegetable Oils Are the Villains

The AHA took it one step further and made the disturbing recommendation to replace saturated fats with polyunsaturated fats – in the form of vegetable oils such as corn and soy oil.

We know that inflammation causes CVD. And guess what causes inflammation: vegetable oils. They are loaded with pro-inflammatory omega-6 fatty acids.

Additionally, vegetable fats are high in linoleic acids. Studies have shown that replacing saturated fats with corn oil increases the risk of coronary heart disease and increases a person’s risk of death by 22 percent.

Vegetable oils should be avoided at all costs. They are inflammatory, high in linoleic acids, contain pesticides and herbicides such as glyphosate, and are unstable under heat causing oxidation in the body.

The AHA’s Report Is Incredibly Misleading

As I see it, a major concern here is that the American Heart Association is in a position of authority and people will undoubtedly follow these recommendations, often to their detriment.

It’s completely irresponsible for an organization which claims “to help people understand the importances of healthy lifestyle choices” to release such a poorly researched and wildly misleading report.

Overall, the American Heart Association has fallen short – yet again – to responsibly educate Americans on what truly constitutes a heart-healthy diet.