LDL is Your Friend 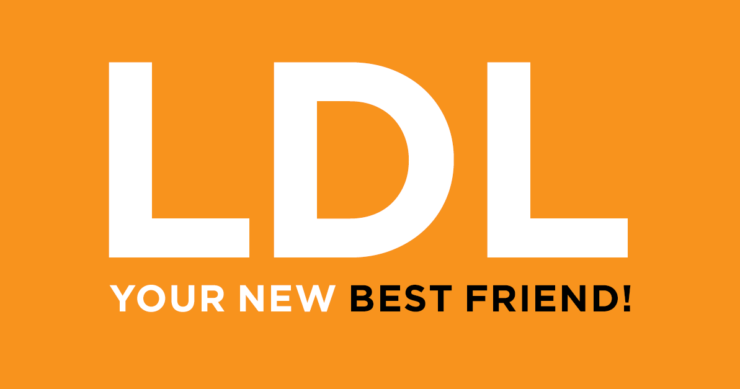 LDL or low density lipoprotein has been given a bad rap. Ever since someone decided to call it “bad cholesterol” it has been demonized as being responsible for just about everything bad in the world. Medical doctors and cardiologists in specific have joined the crusade against LDL with a pervasive mentality that somehow the lower the blood value of LDL, the better. Fortunately, the justification for this altruism is unjustified.

So let’s take a step back for a moment and review just exactly what LDL is and does, and then I’ll move on and explain why the notion of it being something to fear is ill founded.

LDL is what we call a carrier protein, and one of its important jobs is to carry a fundamentally important chemical to every cell in the body. This chemical is a critical component of cell membranes, serves as a brain antioxidant, and is the raw material from which your body manufactures vitamin D, cortisol, estrogen, progesterone, and testosterone. And this important, life-sustaining chemical is cholesterol.

So the notion that LDL is “bad cholesterol” is flawed on two counts. First, it is, in and of itself, not cholesterol, it is a protein. Second, now that you’ve embraced all of its functions in human physiology, it’s clear that LDL is anything but bad. How could we castigate a part of our biochemistry so fundamental for life?

LDL plays a particularly important role in brain health and function as you would expect based on the information above. In fact, you might expect that low levels of LDL might well be associated with compromise of brain tissue, and you would be right.

Earlier this month, researchers publishing in the prestigious journal, Neurology, designed a study to explore possible correlations between various markers of blood fats and risk for specific changes on MRI scans of the brain in 2,608 adults. The MRI changes in the brain they explored were changes associated with damage to small blood vessels, and, changes in the brain’s white matter associated with small strokes as these changes represent “powerful predictors of stroke and dementia.”

The researchers concluded that there was a strong correlation between these threatening brain changes and the blood measurement of triglycerides. While the reverse was true as it related to LDL. Meaning that higher levels of LDL were associated with less risk of the brain changes that are so worrisome.

This is really important information first because triglycerides, which you will generally see as one of the results on your typical blood work, is strongly associated with detrimental changes in the brain. What’s more, triglycerides reflect blood sugar and as such, reflect the amount of sugar and carbohydrates in the diet, not the amount of fat a person consumes. Second, this study is one of many that should clearly reframe our view of LDL as higher levels appear to be strongly brain protective.

So here’s what I would like you to do. If you are being told by your doctor that your LDL is too high and that the lower it is, the better, please print this study and ask why you would want a lower level of a blood marker that may well be protecting you from stroke and dementia.

LDL is our friend and is here to help us.