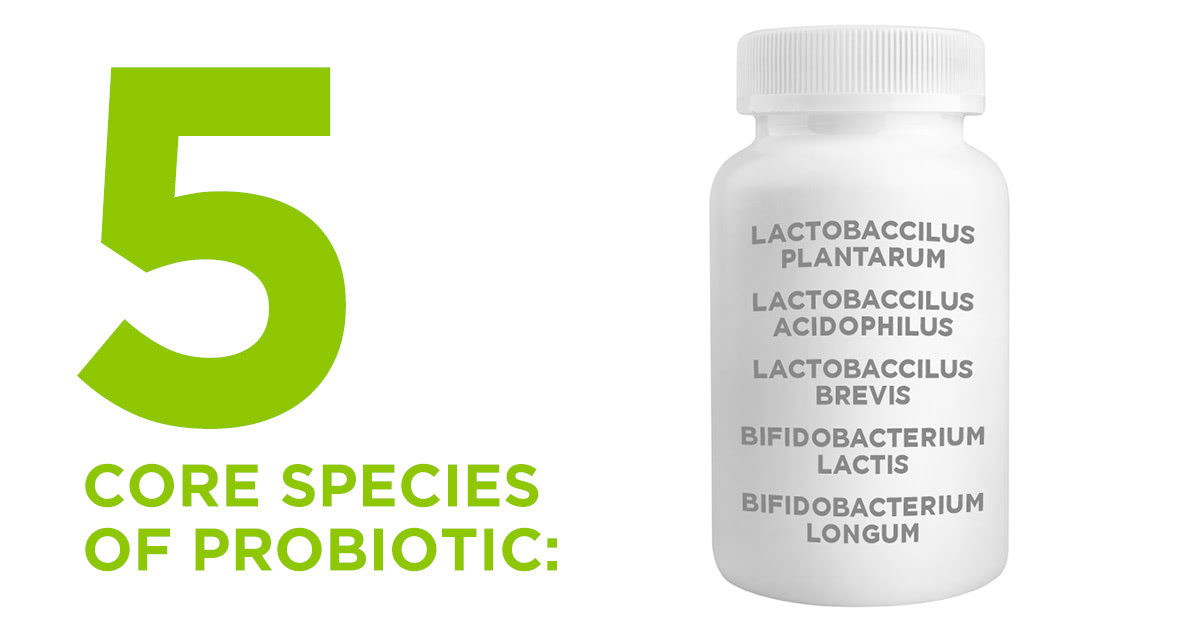 It’s overwhelming how many probiotics are now available today, and the number of different combinations available as nutritional supplements at health food stores, and even added to foods, is growing. There are myriad different species of bacteria that make up the human microbiome, but science has identified some major players, and aggressively studied these in both animals and humans. As such, I’ll focus on this core group of probiotic species.

To make the task of finding and purchasing the right formulas as easy as possible, I’ve simplified my recommendation to just 5 core species that are widely available: Lactobaccilus plantarum, Lactobaccilus acidophilus, Lactobaccilus brevis, Bifidobacterium lactis and Bifidobacterium longum. Different strains provide different benefits, but these are the ones that will support your body’s biology by doing the very things we’ve been discussing since the beginning of the book when it comes to sustaining brain health.

Lactobaccilus plantarum: Found in kimchi, sauerkraut, and other cultured vegetables, this bug is one of the most beneficial bacteria in your body. It survives in the stomach for a long time and performs many functions that help regulate immunity and control inflammation in the gut. It also helps fortify the gut lining, fending off potential invaders that might compromise the intestinal wall and sneak into the bloodstream. In fact, L. plantarum’s beneficial impact on the gut lining is perhaps its most important attribute, for it reduces gut permeability, thereby reducing the associated risks for leaky gut—including an increased risk for virtually every brain disorder. Moreover, L. plantarum can quickly digest protein, and this has the ultimate effect of preventing food allergies and even treating such allergies when they arise. Its been shown in experimental animal studies to protect engineered mice from having clinical symptoms of multiple sclerosis and even reduce the inflammatory response typical of that condition. Finally, L. plantarum has an uncanny ability to absorb and maintain important nutrients such as brain-friendly omega- 3 fatty acids, vitamins, and antioxidants. All of these actions make L. plantarum essential for fighting infection and taking control of any pathogenic bacteria.

Lactobaccilus acidophilus: L. acidophilus is the darling of fermented dairy products, including yogurt. It keeps the balance of good vs. bad bacteria in check and in doing so, aids your immune system. In women, it helps to curb the growth of Candida albicans, a fungus that can cause yeast infections. L. acidophilus has also gained fame for its ability to help maintain cholesterol levels. In the small intestine, L. acidophilus produces many beneficial substances that combat pathogenic microbes, including acidolphilin, acidolin, bacteriocin, and lactocidin.

Lactobaccilus brevis: Sauerkraut and pickles owe a lot of their benefits to this bug, which improves immune function by increasing cellular immunity and even enhancing killer T cell activity. It’s so effective in combating vaginosis, a common bacterial infection of the vagina, that it’s added to pharmaceuticals used to treat it. L. brevis also acts to inhibit the effects of certain gut pathogens. Perhaps best of all, it has been shown to increase levels of that all-star brain growth hormone BDNF.

Bifidobacterium lactis (also called B. animalis): Fermented milk products like yogurt contain this gem, which is well documented to have a powerful effect on preventing digestive ills and boosting immunity. It’s also known to be helpful in knocking out food-born pathogens like salmonella, which causes diarrhea.

Bifidobacterium longum: Just one of the 32 species that belong to the genus bifidobacterium, this is one of the first bugs that colonize our bodies at birth. It has been associated with improving lactose tolerance and preventing diarrhea, food allergies, and the proliferation of pathogens. It’s also known to have antioxidant properties as well as the ability to scavenge free radicals. In laboratory mice, B. longum has been shown to reduce anxiety. Like L. acidophilus, B. longum also helps maintain healthy cholesterol levels.

Parasites Define Leaders
Something You Should Buy for Better Brain Energetics
New Medication Associated with a 50% Risk Reduction for Dementia!
“