The Science Behind Why "Low Alcohol" Wine Matters for Your Health

The Science Behind Why “Low Alcohol” Wine Matters for Your Health 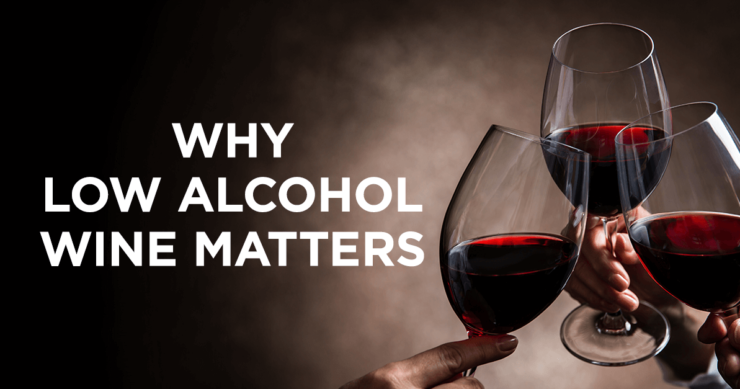 By: The Dr. Perlmutter Team

Alcohol is one of the most controversial topics health and wellness practitioners must navigate. Frequently, readers of this blog ask if alcohol consumption can be a part of a healthy lifestyle — my answer is, it depends.

It’s actually pretty simple: the relationship between alcohol consumption and cardiovascular health is best described visually as a “U-shaped curve,” meaning alcohol consumption, up to a certain point, may help improve cardiovascular health, but beyond that point, it may have a detrimental effect. In the Journal of Internal Medicine study, this critical point was defined as 24g of alcohol per day, the equivalent of two twelve-ounce beers, two five-ounce pours of wine, or two one and a half-ounce shots of distilled liquor. So from this study, we may conclude that alcohol, in small doses, may improve cardiovascular health, while overdoing it can be very harmful. Interestingly enough, a second analysis recently published in Frontiers in Nutrition found that this “U-shaped curve” relationship holds true when examining the impact of alcohol consumption on brain health. Moderate drinking, defined in the study as less than four glasses of wine per day, was associated with a significant decrease in risk of developing Alzheimer’s disease and dementia when compared to individuals who did not consume alcohol.

At the end of the day, whether or not you choose to consume alcohol is as much a personal decision as it is an ascribed lifestyle or wellness one. If you choose to enjoy alcohol it is important to keep in mind that, like any foodstuff, all alcoholic beverages are not created equally. The above-referenced Frontiers in Nutrition study singled out red wine as the alcoholic beverage with the greatest potential health benefits, owing to the presence of polyphenols in the drink. Polyphenols are phytonutrients that serve as potent antioxidants, nurture healthy gut bacteria, reduce inflammation, fight damaging free radicals, and, as the study suggests, may even prevent the formation of amyloid protein in the brain. However, it’s not as simple as grabbing a bottle of red wine with a label that intrigues you off the shelf; in order to ensure you do not consume any harmful byproducts of production, you should make sure the wine you drink is organic, pesticide- and herbicide-free, and doesn’t contain any additives. I would actually like to take this one step further though and suggest an alternative to modern wines you should consider when choosing a varietal: low-alcohol wine.

What exactly is considered low alcohol wine, you ask? It is a wine that is 12.5% alcohol or lower, compared to many wines on the market that have alcohol percentages that are typically 2-4% higher.

The Changing Nature of Wine

Louis Pasteur, the father of microbiology, once proclaimed: “Wine is the most healthful and most hygienic of beverages.” However, the wine of Pasteur’s day would hardly be considered a drink comparable to the wine we commonly consume today. Over time, wines have gotten considerably stronger, with that increase accelerating significantly in the last few decades as the science of viticulture has allowed vintners to make boozier wine through advancing cultivation, harvest, and production techniques. To illustrate this change, a group of economists recently conducted an analysis of alcohol by volume (ABV) data collected by the Liquor Control Board of Ontario, which tests the alcohol content of every wine imported for sale in the province. This study found that the ABV of the average wine climbed from 12.7% in 1992 to 13.8% in 2009, an increase of more than one full percentage point! More concerning, however, is the fact that the study found that over half of the bottles tested contained a higher ABV than what was listed on the label. While the systemic underreporting of ABV is not illegal most countries allow a margin of error in reporting ABV between one and one and a half percentage points — it is very important to keep in mind when monitoring alcohol intake.

The increasing alcohol content of wine over time, coupled with the realization that labels clearly cannot be relied upon to inform our decision making regarding alcohol consumption, greatly increases the appeal of low alcohol wine. Interestingly enough, there is actually historical precedent to the idea of drinking wine that has a lower alcohol content than its out of the barrel cousin. The philosophers of Ancient Greece frequently took part in symposia, raucous gatherings filled with food, wine, and spirited conversation. However, the wine at these banquets was consumed in a unique way: by mixing equal parts wine and water in special vessels called kraters, the revelers could lower the alcohol content of their wine and productively participate in the symposia for much longer without feeling drowsy or overly intoxicated. It’s also important to remember here that they were watering down wine which was already weaker than today’s offerings!

A Note on Alcohol and Sugar

Whether your choice of drink is wine, beer, or liquor, make sure you are aware of the massive amounts of hidden sugar that can be present in these beverages. Cocktails are the most frequent offender, with sugary mixers and syrups often being used to cut the taste of these higher alcohol content drinks. Even certain beers—especially festive or limited editions with fruity or floral flavor profiles—can have a hidden payload of sugar on the Nutrition Facts label, and many wines have added sugar to suit the palates of modern drinkers. However, low alcohol wine is sugar-free because it is fully fermented, meaning the yeast has consumed all available sugar during the fermentation process. Remember that all of the beneficial effects of light alcohol consumption outlined above will be quickly offset if you are consuming spoonfuls of sugar right along with it.

While some people may think it is counterintuitive to hear a keto-adhering, gluten-free neurologist touting the benefits of alcohol, the science to support the notion that alcohol consumption can be a part of a healthy lifestyle is very compelling. If you are like me and enjoy the occasional drink, my recommendation is to opt for a red wine that is low-alcohol, organic, free of additives, and has less than 1g of sugar per liter.

Read more: Alcohol – How Much and Which Type?

I receive many questions from people who are looking for high-quality natural wines. And as someone who enjoys the occasional glass of wine, I certainly understand how difficult it is to find wines without additives, added sugars, or high concentrations of alcohol.

To provide an option for those people, I partnered with Dry Farm Wines, which is my go-to company for high-quality natural wines. And as a member of our community, you can receive an extra bottle for $0.01 on your first order through this link.

So if you are looking for high-quality natural wines, try them out and let me know what you think!

When you purchase a product through the partner link above, we make a small commission which helps support our website and content creation. So if you decide to give a product a try, many thanks!