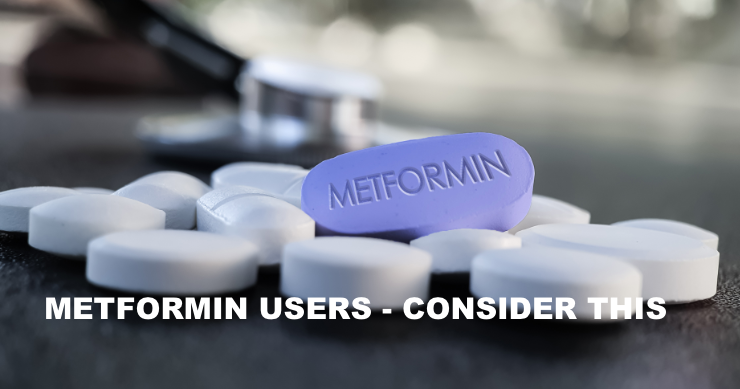 Metformin is one of the most commonly prescribed medications on the planet. It is considered a “first-line” therapy for lowering blood glucose in the treatment of type-2 diabetes and has also proven useful in the treatment of polycystic ovarian syndrome, prediabetes and insulin resistance. Off label use for weight loss seems to be more common as of late. And, it’s even become popular in the anti-aging community. Some estimates indicate that metformin is used by more than 100 million people worldwide.

I agree that there are some intriguing attributes of this drug and that its potential utility is significant. But, as always, it’s appropriate to evaluate potential risks associated with metformin use. And one issue stands out for me, especially as a neurologist. Long term usage of metformin has been consistently associated with deficiency of vitamin B12. And low B12 levels can threaten the brain and peripheral nerves as well as lead to anemia. Indeed, in a standard evaluation for dementia as well as peripheral neuropathy, checking the blood level of vitamin B12 is considered standard practice. In fact, we are now seeing the term metformin-induced vitamin B12 deficiency being used in medical literature, especially as it relates to worsening of nerve damage in the diabetic patient.

Moreover, in a recent study, 90 type-2 diabetic adults who were taking metformin for at least 4 years and who had nerve damage were randomized to receive B12, 1 mg daily by mouth or placebo for 12 months. Those receiving the B12 showed higher blood B12 levels as one might expect. But in addition, those in the B12 group showed a marked improvement in their neuropathy based on a series of subjective and objective evaluations.

So again, I am grateful that we have metformin available to us to use in various clinical situations. But its use, at least long term, may well compromise vitamin B12. And this is a very important point to consider. As such, for those on metformin, it makes sense to monitor the B12 level.

As the authors of a recent publication on this topic stated:

Given the high global prevalence of diabetes, which affects more than 460 million people worldwide, the widespread use of metformin as an insulin-sensitizing agent for treatment of insulin resistance, prediabetes, T2D and PCOS, as well as the chronic nature of treatment of such conditions, it is important to recognize vitamin B12 deficiency as a potential adverse consequence of long-term and high-dose metformin therapy. As no definite guidelines are currently available for vitamin B12 deficiency screening in metformin-treated patients, this deficiency remains often unrecognized in such individuals.

Further, these authors present a proposed criteria and schedule for intermittent testing of metformin users at risk for B12 deficiency as well as treatment options. And, for anyone taking metformin, this is information well worth deep consideration.