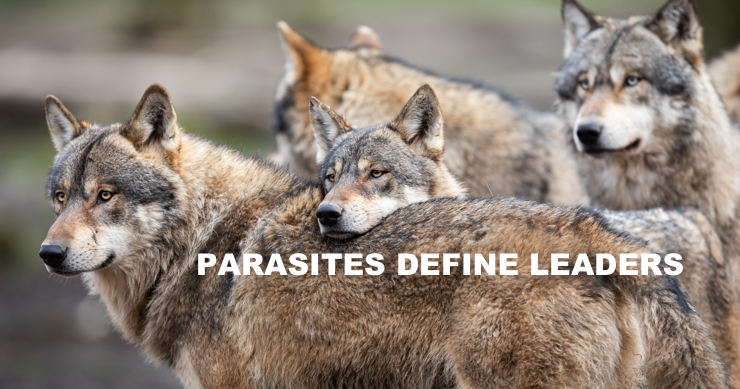 We tend to want to characterize the various microbes that live within us as being “good or bad.” But in reality, context is critically important. Most would probably say that across the animal kingdom, being infected with the parasite that causes toxoplasmosis would be bad thing.

We certainly know that in humans, toxoplasmosis can be a life-threatening infection, although it is certainly quite common. Indeed, according to the CDC, toxoplasmosis is considered to be the number one cause of death attributed to foodborne illness. More than 40 million Americans carry the toxoplasma parasite, but in fact, very few have symptoms because the immune system is able to keep the parasite from causing significant illness.

But again, if we look at context, is there ever a circumstance in which being infected by this parasite might be a good thing?

In new study, published in the journal Communications Biology, researchers in Yellowstone National Park followed a population of wolves for five years. They took blood samples from 229 of these wolves and compared these blood samples to their behavior.

Further, being infected with this parasite did not produce any negative effects in terms of the health of these individuals as adults.

This is incredible data as it clearly makes us focus on the context of an infection. In this case, infection with toxoplasma had dramatic effects on the behavior of these wolves and their decision-making. Increased risk-taking behavior has been seen in other studies in relation to toxoplasma infection in rodents, hyenas, and chimpanzees.

In this case, being perhaps more aggressive and taking more risky behavior seemed to define these wolves for their roles as pack leaders. In humans, we know that chronic inflammation does tend to increase impulsive behavior and risk-taking as well, as we described in Brain Wash.

For me, the interesting take on the message of this research is that we really have to rethink our characterization of various types of infections as being “bad or good.” There may be selective advantages to having a specific type of infection or at least colonization by a particular type of microbe. As such, the notion of doing a “bowel cleanse” to get rid of what we may consider to be bad microbes or germs, might well need to be reconsidered.

The other interesting take home message from this study is that it demonstrates the profound effects that microbes have on behavior. I have no doubt that the same mechanisms may well be a play in humans, as research has clearly demonstrated.