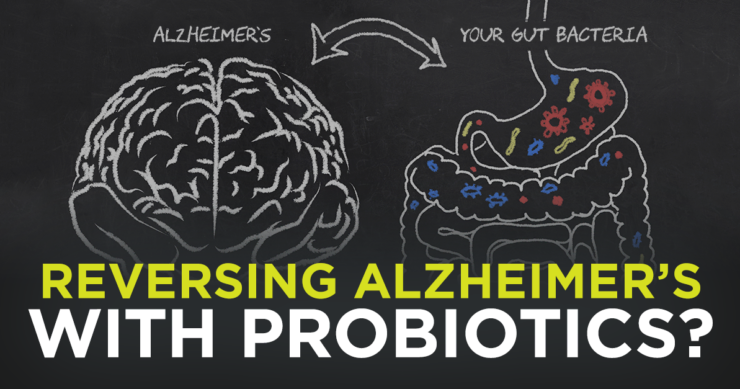 For the past several years I have been writing and lecturing about the relationship between Alzheimer’s disease and changes in the gut bacteria. We know, for example, that Alzheimer’s is an inflammatory condition. As well, we know that changes in gut bacteria enhance inflammation. So it seemed quite reasonable to assume that damage to, and loss of diversity in, gut bacteria could hasten brain degeneration so characteristic of Alzheimer’s. We know, for example, that loss of diversity in the gut organisms as measured in populations in various countries correlates to increased prevalence of Alzheimer’s disease in those countries, as was so eloquently described in my Empowering Neurologist interview with Dr. Molly Fox.

But now it’s time to look at this issue in another way. Let’s ask this question: if damage to the gut bacteria relates to worsening of the brain in Alzheimer’s disease, could restoration of good bacteria using probiotics help the situation? This is quite a question when you think about the implications of what this might mean for the more than 40 million individuals around the world suffering from a disease for which there is no treatment.

Well, we may well have an answer to this compelling question, and it’s really great news. Researchers publishing in the journal Frontiers in Aging Neuroscience took a group of elderly Alzheimer’s patients and studied them for 12 weeks. Each participant underwent a test for mental function called the mini-mental status exam (MMSE), a standardized cognitive assessment used worldwide. They also underwent a blood test called highly sensitive c-reactive protein (hs-CRP), a powerful marker of inflammation. These tests were then repeated after 12 weeks.

The results of the study were stunning. The placebo group showed an increase in hs-CRP, the inflammation marker, by an impressive 45%. In the group taking the probiotic, on the other hand, hs-CRP didn’t just stay the same, but actually declined by 18% indicating a dramatic reduction in inflammation.

But here’s the truly exciting news. Over the 12 weeks, the patients in the placebo continued to decline mentally, as you might expect. Their MMSE score dropped from 8.47 to 8.00, a substantial reduction. But the group on the inflammation reducing probiotics actually demonstrated, not a decline in brain function, but an actual improvement, with their MMSE scores going from 8.67 up to 10.57, and that’s a huge improvement. Again, not only was their mental decline stopped in it’s tracks, these individuals regained brain function!

The message here is that inflammation is directly determined by the health and diversity of our gut bacteria, and this has major implications in terms of brain health, function, and disease resistance. Recognizing that inflammation is the mechanism underlying not just Alzheimer’s disease, but Parkinson’s, multiple sclerosis, diabetes, coronary artery disease, and even cancer means that the findings in this report may have wide implications.

One thing’s for sure. We’ve got to do everything we can to support the health and diversity of our gut bacteria, and we’ve got to absolutely stay on top of this emerging research that may finally open the door to a cure for Alzheimer’s disease.