Looking at Cholesterol Levels and Cognitive Performance in the FHS 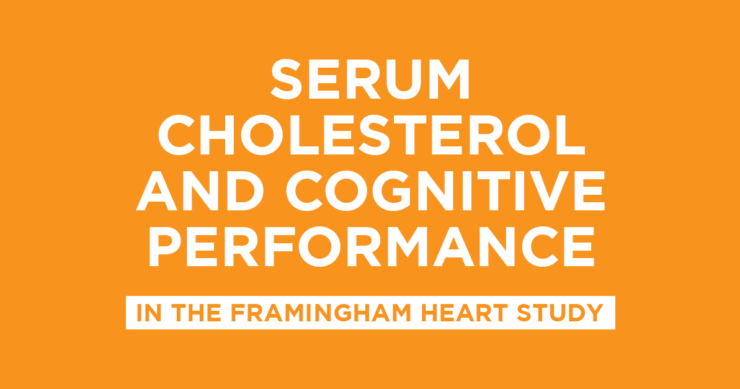 If, like most of us, you watch TV, read magazines or newspapers, youâre probably being bombarded by advertisements focused on the message that cholesterol is about the worst thing for your health and longevity. Each day in my office I amazed at how pervasive this message has become. Basically, weâve been lead to believe that cholesterol threatens all aspects of our health, and the lower the number the better. In reality, nothing is further from the truth, especially as it relates to brain health. The Framingham Heart Study is arguably one of the most well respected epidemiological studies ever conducted. The data it has generated has had wide ranging implications in terms of recommendations for health, and rightfully so. In a recent report entitled, Serum Cholesterol and Cognitive Performance in the Framingham Heart Study 789 men and 1105 women were examined to determine the relationship between total cholesterol and cognitive performance. All subjects were free of dementia and stroke at the beginning of the study and were followed for 16 to 18 years. Cognitive tests were performed every 4 to 6 years evaluating things like learning, memory, attention, concentration, abstract reasoning, concept formation, and organizational abilities, all things that are compromised in patients with Alzheimer’s disease. As the study reported:

There was a significant positive linear association between total cholesterol and measures of verbal fluency, attention/concentration, abstract reasoning, and a composite score measuring multiple cognitive domains.

The conclusion of this well respected study stated:

This study again reaffirms the fundamental importance of cholesterol as it related to brain health and function.  Cholesterol is a desperately important brain nutrient and is critical for the function of neurons. It acts as a brain antioxidant and also a precursor to important brain supportive elements like vitamin D, as well as the steroid hormones. Most importantly, cholesterol serves as an important fuel for the neurons. Neurons themselves are unable to generate significant cholesterol and rely upon delivery of cholesterol from the blood stream. With this information in mind, no wonder the FDA recommended label changes to statin medications used for cholesterol lowering in February of 2012, stating:

Certain cognitive (brain-related) effects have been reported with statin use.

Statin labels will now include information about some patients experiencing memory loss and confusion.