Should We be Treating Hair Loss with Fecal Material?

Should We be Treating Hair Loss with Fecal Material? 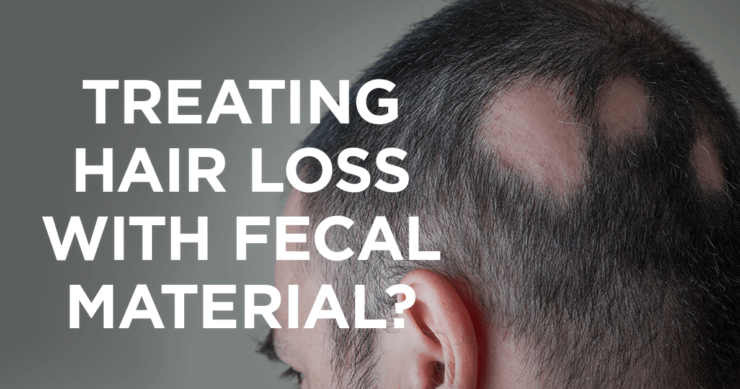 Alopecia areata is a form of baldness that affects approximately 2% of people in the United States. In this condition, hair is lost from various parts of the body, typically the scalp. The actual cause of this condition is unknown, but new research clearly supports the idea that this disease is an autoimmune condition, meaning it is a manifestation of a disruption of the regulation of the immune system. There is certainly thought to be a genetic component as well.

Treatment for this condition is often unsuccessful, but includes medications designed to treat immune imbalance. This may include the use of steroids.

One important observation that has come to the forefront of science in recent years is the very important role of the gut microbes in terms of regulating the immune system, and it is this knowledge base that has formed the basis for this recent report appearing in the American College of Gastroenterology Case Reports.

The report describes two individuals who suffered from significant hair loss related to alopecia who were treated for a gastrointestinal disorder, an infection called Clostridium difficile, or as it is more commonly known, C. diff. The individuals were treated with fecal microbial transplants (FMTs), meaning that they were given, into their colons, fecal material from healthy donors. This has proven to be an incredibly effective treatment for C. diff., and is now being performed in approximately 500 hospitals in the US.

To reiterate, the individuals in this report happened to be suffering from alopecia when they developed C.diff., for which they were treated with fecal microbial transplants.

What happened following their treatment was truly remarkable. Both patients began to experience fairly rapid regrowth of their hair.

Figure (A) shows one of the patients at age 16, when he was first diagnosed with alopecia. Obviously, he was already suffering from extensive hair loss. He subsequently lost all of the hair on his head. In figure (B), he is seen several months following FMT. Figure (C) shows him one and a half years after the fecal transplant. This is certainly not the first recognition in medical literature that FMT may play an important role in treating autoimmune conditions. Case reports are now appearing using this procedure in the treatment of Parkinson’s disease and multiple sclerosis, for example.

To be clear, I’m not suggesting that people with alopecia should seek out FMT as a proven treatment for this condition. I am, however, calling attention to this recent publication as it clearly drives home the point that our gut organisms play a huge role in regulating the balance of our immune systems.

That said, it certainly makes good sense, in my opinion, for all of us to do our very best in terms of caring for those important 100 trillion microbes living in our digestive systems.