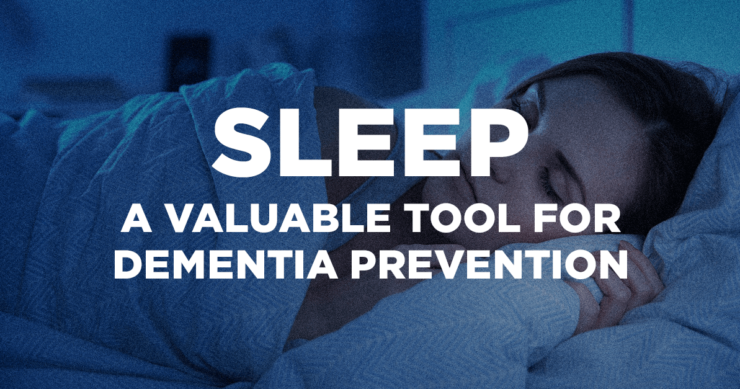 There is so much we can do from a lifestyle perspective to help safeguard our brains against declining function. And certainly getting a good night’s sleep is one of the most important choices a person can make to help preserve and protect this vital organ. In October 2020, I wrote a piece on the relationship between sleep duration and cognitive decline, and it was based on a very large study performed in England. This study demonstrated that there was risk for cognitive decline with not enough sleep as well as too much sleep. And it concluded that between 7 to 8 hours of sleep each night is the “sweet spot” in terms of being related to the least risk for cognitive decline.

This week, a new study published in the journal Nature Communications entitled “Association of sleep duration in middle and old age with incidence of dementia” reviewed data from close to 8,000 participants over a 25-year period of time. They demonstrated that there was higher risk for developing dementia with sleep duration of six hours or less at specific ages of 50, 60, and 70 years. The findings of the study showed the risk for actually developing dementia was increased by 30% in all three age categories. To be sure, these findings were independent of sociodemographic, behavioral, cardiometabolic, and mental health factors.

Interestingly, in contrast to the study I quoted last year, these researchers did not find strong evidence that longer sleep duration is associated with dementia risk. In fact, there were very few individuals in the study who actually experienced long sleep duration so this was difficult to evaluate.

As far as an explanation for this relationship, these researchers described various issues associated with not getting enough sleep including increased inflammation in the brain, atherosclerosis, impaired clearance of amyloid beta, and impaired function of the lymphatic system, an inherent system within the brain that is active during sleep that helps the brain rid itself of toxic accumulations.

The take-home message here is that sleep duration during midlife likely translates to a significantly increased risk of dementia later in life. So it looks like we really need to do everything we possibly can to get a good night’s sleep. In the past few years I have become very impressed with how helpful wearable devices are in terms of providing feedback with reference to length and quality of sleep. This is important because it allows us to see how changes in our lifestyle choices are reflected in our sleep parameters. For example, one might limit afternoon coffee consumption to see if there are any improvements in length or quality of sleep based on feedback from a wearable device. In addition, one might consider reducing exposure to blue light in the evening, the type of light that comes from our various digital devices that can inhibit our brain’s ability to produce melatonin, a chemical made in the pineal gland that is so important in terms of restful sleep. Cooling the room down by a couple of degrees is also helpful for many, and melatonin as a supplement has been shown to be effective as a sleep aid as well.

Learn more about the importance of sleep as well as tips to improve your experience by visiting my Focus Area on Sleep.