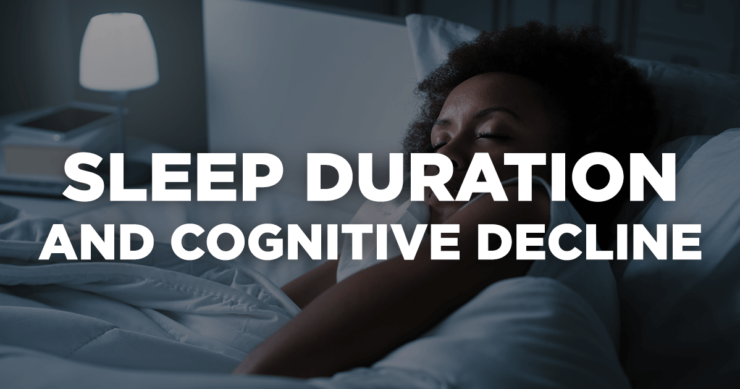 When asked what supplements I recommend for optimal health, I occasionally reply, “sleep.” Sleep is powerful on so many levels in terms of health outcomes. We know that sleep duration and quality impact inflammation, what and how much we eat, hormone balance, decision-making, mood states, and much more.

An interesting study on sleep recently appeared in one of the publications of the American Medical Association called JAMA Network Open. The researchers behind the study sought to investigate the association between sleep duration and cognitive decline. They analyzed data from 20,065 total participants in two cohort studies, one in the United Kingdom, The English Longitudinal Study of Ageing (ELSA), and one in China, the China Health and Retirement Longitudinal Study (CHARLS). The ELSA sample included people 50 years or older and the CHARLS sample included people 45 years or older.

Sleep duration was assessed from self-reports in interviews with study participants. While participants were asked open-ended questions, they were ultimately divided into seven groups of sleep duration: ≤4, 5, 6, 7, 8, 9, or ≥ 10 hours per night. In terms of cognitive status, both cohorts evaluated memory, executive function, and orientation via specific tasks or tests. Data from all tests were used to calculate a single number known as a z score for each participant that reflects global cognitive function. Data were collected over multiple years in both cohorts, and this study compared baseline data to follow-up data in later years that included at least one measurement of cognitive function.

An interesting finding was revealed: an inverted U-shaped association between sleep duration and cognitive function, depicted in the graphs below. 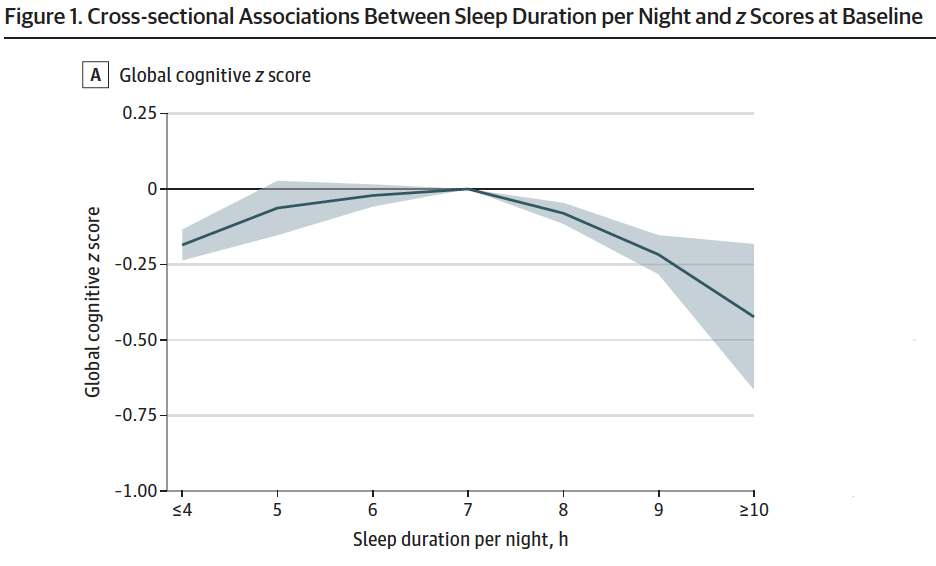 This inverted U shows that the extremes of sleep duration (≤4 or ≥ 10 hours of sleep per night) are associated with lower global cognitive function when compared to sleep durations closer to 7 hours per night, which was the reference group. Analysis showed statistical significance of the association between extreme sleep duration and lower cognitive function at baseline and faster cognitive decline upon follow-up assessments. This finding was consistent in both the group in the United Kingdom and the group in China. The authors also factored in a number of covariates, or variables that might confound the association being studied, including body mass index, blood pressure, certain lifestyle factors, and other illnesses. This U-shaped associated was observed even after adjusting for covariates.

Because the researchers assessed several aspects of cognition, they were able to determine that memory was the main cognitive domain affected by sleep. This is important because, as the authors state, “memory impairment is the core symptom of dementia and can be considered a factor in the conversion from mild cognitive impairment to dementia.”

Though a causal relationship cannot be determined from the study, the discovered U-shaped association is yet another addition to the growing body of scientific literature exploring links between sleep and cognition. As the researchers conclude, this study offers further support that “cognitive function should be monitored in middle-aged and older individuals with insufficient or excessive sleep duration.” In addition to the consideration of sleep as a potential marker for cognitive status, the authors of this study highlight the importance of prevention:

For more information and resources on sleep, including strategies for improving this health-preserving practice, visit my focus page on sleep.

Exercise and Mental Health
The Importance of Empathy
Can A Ketogenic Diet Treat Mental Disorders?