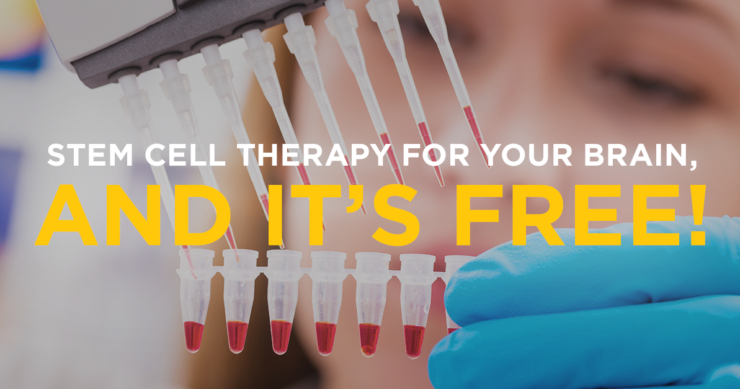 How would you like to undergo stem cell therapy that would target your brain? What if I told you there was a new stem cell program that will give your brain stem cells, enhance the growth and functionality of your brain’s memory center (the hippocampus), is totally safe and will cost you nothing?

It’s hard to imagine that anyone would pass this offer up, especially if they were at risk of developing Alzheimer’s disease.

With the elderly population growing rapidly, a better understanding of preventive measures for maintaining cognitive function is crucial. Studies such as this one suggest that simply caloric expenditure, regardless of type or duration of exercise, may alone moderate neurodegeneration and even increase grey matter volume in structures of the brain central to cognitive functioning.

Cyrus A. Raji, MD, PhD, of UCLA, lead author of the study commented:

We have no magic bullet cure for Alzheimer’s disease. Our focus needs to be on prevention.

And this study concluded that simply engaging in aerobic activities, whether gardening, walking, biking or really anything that would raise heart rate, was associated with a 50% risk reduction for developing Alzheimer’s, a disease for which we have no meaningful treatment whatsoever.

So go out and get some exercise!