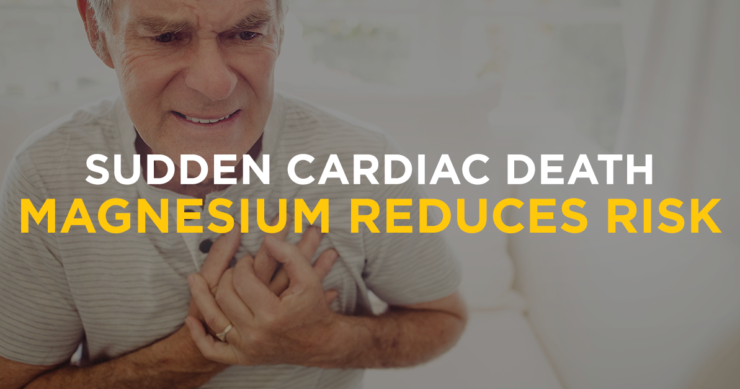 More than half of men and two thirds of women who experience sudden death from cardiac causes do not present any clinically recognized heart disease before they die. That means they hadn’t been diagnosed with angina, or narrowing of the coronary arteries. Basically, assessments by their doctors, if indeed these assessments were carried out, did not raise any concern that these folks were destined to die from a sudden cardiac event.

Clearly, what these statistics indicate is that something else is going on that increases the risk for some people to basically have their heart stop beating. This was the subject of research carried out at Brigham and Women’s Hospital and Harvard Medical School published in the American Journal of Clinical Nutrition.

The researchers, back in 1980, took a look at 88,375 women who were free of cardiac disease. Various lifestyle factors were evaluated every 2 to 4 years with special emphasis on looking at how much magnesium they consumed. In addition, they measured the plasma level of magnesium in these individuals.

Over a 26-year follow-up, sudden death from a cardiac cause occurred in 505 women.

The relationship to the blood tests for magnesium in this study was even more profound. Those participants who had higher blood level of magnesium in comparison to those with the lowest blood level showed a 77% decreased risk of dying as a consequence of a sudden cardiac event.

In human physiology, magnesium plays several very important roles that are relevant to the findings of this study. It has antiarrhythmic actions, meaning that it helps to keep the heartbeat stable. It also improves vascular tone, helping to regulate blood supply to the heart muscle itself. Magnesium helps to lower blood pressure, improve sugar metabolism, decrease the stickiness of platelets, and reduce inflammation. All of these functions are certainly relevant as it relates to heart health, particularly in terms of maintaining normal heart rhythm as well as blood supply.

Western medicine tends to overlook nutritional influences in terms of some of our most aggressive diseases and causes of death. But studies like this drive home the point that seemingly subtle issues related to nutrition can have profound effects in terms of health outcomes.

Here’s what the authors concluded at the end of the study:

Finally, I think it’s important to understand that death from a sudden cardiac event is an extremely common cause of death in American adults. It’s been estimated that the number of Americans who die from a sudden cardiac event is about the same as the number who die from Alzheimer’s disease, motor vehicle accidents, prostate cancer, suicides, breast cancer, cervical cancer, colorectal cancer, diabetes, HIV, house fires, and assault with firearms combined. This underscores the importance of this study, which shows such a dramatic decrease in sudden cardiac death in relation to magnesium levels, as well as consumption.