Support for Weight Training in Your Brain Program 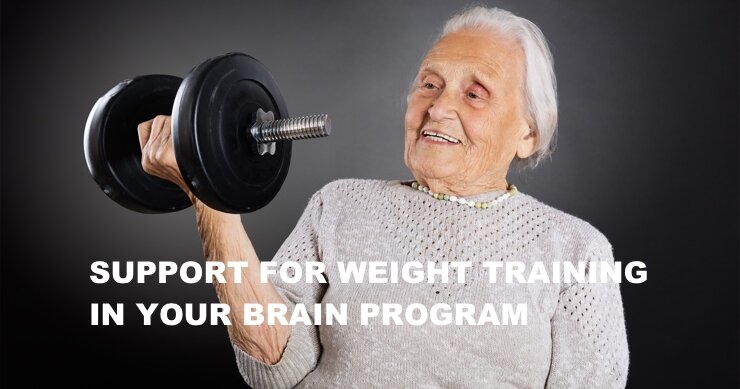 Over the past two decades I’ve spoken and written at length on the important relationship between exercise and brain health. I truly believe that rigorous scientific research supports the idea that one of the most powerful tools in our toolbox to keep our brains functioning well, and stave off Alzheimer’s disease, is to exercise, regularly.

One question that frequently arrises has to do with the type of exercise that we should pursue for the best brain benefit. By and large, I’ve indicated that we need both aerobic as well as resistance training.

So, it is with great interest that I reviewed a new study from JAMA Network Open. The study is entitled, Association of Low Muscle Mass With Cognitive Function During a 3-Year Follow-up Among Adults Aged 65 to 86 Years in the Canadian Longitudinal Study on Aging.

The aim of the research was to determine if there is any relationship between low muscle mass and declines in different cognitive domains over time – in this case, 3 years.

The researchers uncovered a strong relationship between low muscle mass and a decline in executive function over the course of the study. No relationship was found with respect to memory and reaction time.

This finding is really important. Executive function involves skills like being able to plan ahead, following multiple-step commands, and remain task focused even when in a distracting environment. Clearly, executive function is a fundamental part of overall cognitive function. And, I’ll mention that a recent British study demonstrated a strong relationship between low hand-grip strength and dementia as well as mortality.

Why might greater muscle mass prove helpful for the brain?

Here are a few ideas:

This study makes clear the association of muscle mass with brain health and builds upon previous research looking at the overall brain benefits of exercise. Yes, this is a correlative finding, but my interpretation is that we should be encouraged to focus not just on aerobics, but resistance exercise like weight lifting as we endeavor to maintain a healthy brain.