The E-Cigarette Explosion in American Youth—And Why It Matters

The E-Cigarette Explosion in American Youth—And Why It Matters 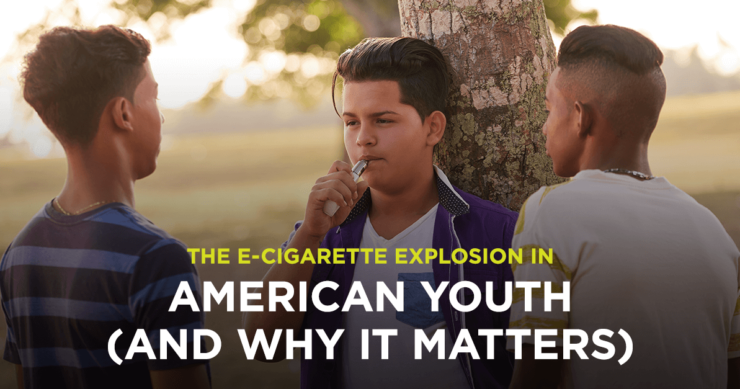 Electronic cigarettes (commonly known as e-cigarettes) are a relatively new phenomenon. They’ve been discussed by some as a safer alternative to regular cigarettes, and have seen massive spikes in popularity over the last several years. Like many new technologies, it’s taken a bit of time for research to catch up with marketing. Unfortunately, this window has allowed for an incredible surge in e-cigarette use within one of our most vulnerable populations.

Why is this happening? Many e-cigarettes are made more appealing to youth by the addition of fruit, candy or similar flavors to improve taste. This would seem to work, as one study found that “for youth, flavors were an especially salient reason to use e-cigarettes.” The incredible spike in youth e-cigarette use has recently led to the FDA telling e-cigarette companies to stop marketing practices that appear to lure young adults to these products. The FDA restrictions are designed to make it harder for adolescents to purchase the products by taking flavored tobacco products off the shelves in places like gas stations and convenience stores. It seems the government has decided to take a stand, but why?

E-cigarettes work by vaporizing liquids at high temperatures. This liquid contains a myriad number of chemicals. E-cigarettes have been deemed “better” than regular cigarettes because they don’t contain tar, and have relatively fewer chemicals in them than standard cigarettes. However, new studies show that there may be very real health risks posed by e-cigarettes. The chemicals contained in the e-cigarette liquid may become toxic when they mix. A common chemical component of e-cigarettes, diacetyl, has been linked to severe and irreversible lung disease. E-cigarettes still contain highly addictive nicotine, which can hook adolescents for life, and appears to affect the development of the young adult brains. Vaporized nicotine from e-cigarettes also appears to raise blood pressure. Finally, e-cigarette use in youth predicts a significantly greater rate of starting to smoke traditional cigarettes.

It’s true that compared to standard cigarettes, e-cigarettes may represent a less-dangerous alternative. Data is mixed, but some research suggests that e-cigarettes could represent a viable pathway to quitting cigarettes. To be clear, this does not mean these are safe products. The long-term effects are yet to be determined, but early research shows possible significant health consequences. We also know that nicotine exposure clearly leads to addiction. While it makes sense to limit young adult’s access to these products, we should continue to question whether consistent use of e-cigarettes is a good plan for anyone.