Failure of Alzheimer's Drugs & The Science of Prevention

The Failure of Alzheimer’s Drugs 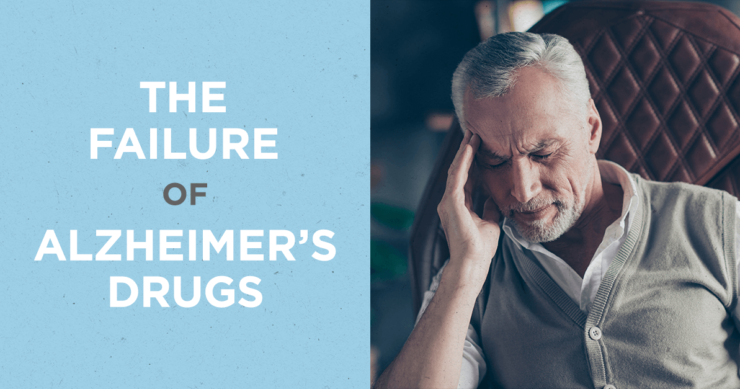 By anyone’s definition, we must now consider Alzheimer’s disease to be an epidemic. Alzheimer’s is a progressive degenerative neurological condition that actually has its origins decades before the initial symptoms of cognitive decline begin to appear. Unfortunately, by the time these symptoms of the disease emerge—memory loss, cognitive decline, and behavioral shifts—there is very little that can be done as, according to our most well-respected medical journals, there is currently no meaningful pharmaceutical treatment for this condition. Despite this reality, pharmaceutical companies continue to market “Alzheimer’s drugs” to the tune of some $3-4 billion annually.

Pharmaceutical Treatments for Alzheimer’s are Failing Us

To be clear, a meaningful pharmaceutical intervention for this devastating condition would absolutely be welcomed by patients and healthcare providers alike. However, as of today, the available Alzheimer’s drugs do not address the underlying disease process, they only attempt to address some symptoms. And, in some cases, these drugs may even worsen cognitive decline.

Despite the optimistic news headlines, Alzheimer’s drugs continue to fail in actual clinical trials. Millions upon millions of the dollars that are spent every year trying to unlock the mysteries of this condition continue to come up empty when it comes to finding a meaningful treatment. In fact, Pfizer, one of the world’s largest pharmaceutical companies with an R&D arm that spends billions of dollars a year developing drugs for profitable markets, has announced that they are no longer trying to find a cure for the disease.

Last year, JAMA Network Open published the findings of a meta-analysis that sought to evaluate the results of 10 high-quality, peer-reviewed studies conducted on two common classes of Alzheimer’s drugs: cholinesterase inhibitors (ChEls) and memantine. These studies represent the experiences of more than 2,500 patients suffering from Alzheimer’s and the results were telling. Not only did the drugs fail to meaningfully treat the symptoms of Alzheimer’s, they were associated with a significantly increased rate of cognitive decline. It’s worth saying this again: cholinesterase inhibitors, which are the largest and most frequently prescribed class of drugs used in the “treatment” of Alzheimer’s disease, have been associated with the worsening of symptoms of the disease they are intended to treat.

Memantine was also shown to be ineffective in a recent study published in the Journal of the American Medical Association. Researchers sought to examine the impact of vitamin E (alpha-tocopherol) and memantine—both alone and together—on the progression of Alzheimer’s Disease. This double-blind, placebo-controlled, randomized clinical trial—the gold standard of clinical research—found that once again memantine was associated with more cognitive decline in Alzheimer’s patients when compared to a placebo. Interestingly enough, vitamin E alone had a positive impact on cognition, but this effect was neutralized when it was paired with memantine.

The Cornerstone of Alzheimer’s

Clearly, we have very little to show for the mountain of time, effort, and financial resources that have been spent searching for a meaningful intervention for Alzheimer’s. While there should be continued interest in developing drug-based therapies, the focus should really be on prevention. Based on some of our most well respected, peer-reviewed research we do know that there are many steps that are clearly associated with reduced risk for this disease. These lifestyle-based interventions, including exercise, diet, sleep, and stress management, all function to address the cornerstone of Alzheimer’s disease: inflammation.

At its core, Alzheimer’s is a bioenergetic breakdown. It represents the failure of the brain to power itself using the fuel to which it is most accustomed: glucose. Many people think that Alzheimer’s results in the destruction of brain cells, but patients suffering from Alzheimer’s have an abundance of functional neurons—they just aren’t functioning. As Alzheimer’s advances, the affected neurons lose their ability to utilize glucose for fuel and therefore lay idle and unused. This shutdown is ultimately precipitated by high blood sugar, which causes insulin resistance; the more insulin resistant our bodies become, the less our brain cells are able to metabolize glucose. However, exciting new research has demonstrated that ketones, a fuel source our bodies produce from fat, have the ability to “repower” these idle neurons and put them back to work in the brain.

This view of the pathogenesis of Alzheimer’s is backed up by the reproducible correlations we consistently see between blood sugar and dementia. One recent study published in the New England Journal of Medicine found that even mild elevations in blood sugar could be tied to an increased risk of developing dementia. What is even more frightening is that this relationship holds true even in individuals who are not diabetic.

Viewing Alzheimer’s as an inflammation-driven bioenergetic failure allows us to formulate lifestyle-based approaches to the prevention and treatment of the disease. Furthermore, a focus on controlling inflammation has a trickle-down effect: because inflammation underpins virtually every chronic condition we face today, approaching the prevention of Alzheimer’s disease in this way may well help lower your risk for diabetes, heart disease, and cancer.

The most important step for lowering the risk of developing Alzheimer’s disease is to control blood sugar, ideally keeping the fasting blood sugar below 90. As such, it is worthwhile to consider buying an at-home glucose monitor to follow blood sugar levels closely. And the best dietary approach to lower blood sugar to the ideal range is to dramatically reduce the consumption of sugar and refined carbohydrates while welcoming healthful fats back to the table. One of the ways to accomplish both of these goals is to adhere to a ketogenic diet.

Additionally, an increasingly popular area of interest as it relates to inflammation is the role of the microbiome, or resident bacteria, primarily those that reside in the gut. The microbiome plays a critical role in controlling metabolism and, by extension, inflammation. So taking steps to support gut health is another essential step towards preventing Alzheimer’s. Supplementing your diet with probiotics and prebiotic fiber, while avoiding artificial sweeteners, refined carbs, toxic pesticides, and heavy metals are helpful ways to nurture the microbiome and allow it to function properly.

Unfortunately, we live in a time in which Alzheimer’s has no cure. Nonetheless, it is, to an important degree, a preventable situation. The research is clear, and we have clinicians across the country who are recognizing the fundamental importance of focusing on Alzheimer’s prevention. Considering the demographics of our aging population and the sky-high costs of managing this condition ($250 billion in 2018), it becomes painfully clear that this is a public health crisis.

Unfortunately, powerful market forces are standing in the way of these advances. Unlike pharmaceuticals, no one can patent, license or otherwise monetize broad interventions like diet and exercise. Even though these steps are well-established for the important roles they play in paving the way for brain preservation, our current paradigm does not encourage the prevention narrative of Alzheimer’s—only its treatment.

It is the responsibility of healthcare providers as well as families and loved ones of Alzheimer’s patients to increase awareness of this narrative and champion the cause of prevention.

Alzheimer’s – The Science of Prevention In this groundbreaking documentary series, David Perlmutter, MD, board-certified neurologist and #1 NYT bestselling author, along with leading experts in the field of brain health, reveal the powerful ways you can decrease your chances of developing Alzheimer’s disease.

Register now to be the first to know when each episode is available to watch FREE for 24 hours.