A Powerful Recipe for Pregnancy: Fish Oil and Probiotics

The Importance of Fish Oil and Probiotics in Pregnancy 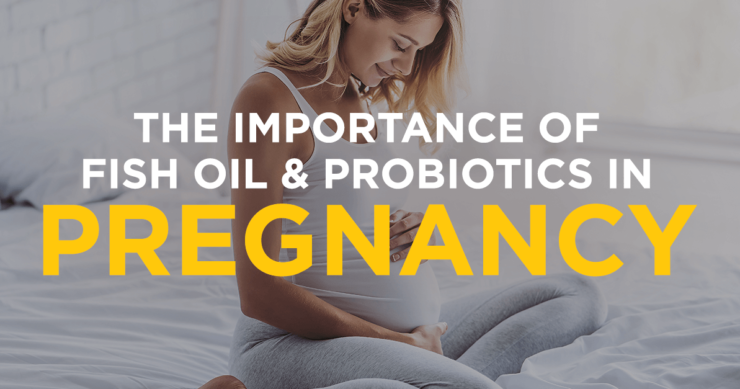 Food allergies, and a specific skin condition called eczema, are rapidly increasing in the youth population. Now, in what may be the largest study of its kind ever performed, researchers are studying a woman’s diet during pregnancy, as well as duration of breast-feeding post-birth, to assess a child’s susceptibility to allergies, as well as risk for conditions like eczema and autoimmune disorders. British investigators, evaluating over 1.5 million people, have come up with some very compelling information.

The research is what’s called a meta-analysis, meaning that it is review of previous studies (over 400 in this case) involving over 1.5 million people, and dating as far back as 1946. The researchers discovered that there was a weak, but nonetheless demonstrable, relationship between breast-feeding and reduced risk of eczema during infancy, as well as reduced risk for type I diabetes. In addition, probiotics seemed to reduce the risk of allergic reactions to cow’s milk.

The data, however, was much more supportive of the relationship between taking a probiotic supplement while 36 – 38 weeks pregnant, and during the first 3 to 6 months of breast-feeding, and risk for childhood eczema. In fact, in those women taking probiotics, risk for eczema in their child was reduced by 22%. The scientist noted that most of the probiotics contained a bacterium called Lactobacillus rhamnosus.

Again, this is a meta-analysis study, not an interventional trial where people either get an intervention or a placebo. That said, scientists in Finland recently tried to determine if probiotics, given to pregnant women, might reduce the chance of their babies developing eczema. Women were selected if they themselves had allergies, as this increases the chances that their babies will develop eczema. The study involved several hundred women, half of whom were given a probiotic during their last two months of pregnancy, as well as during the first two months of breastfeeding. The other group received a placebo. The results of the study were dramatic: the risk of developing eczema in the probiotic group was an astounding 70% lower than the placebo group.

Getting back to this new report, women who avoided things like nuts, dairy, and eggs during pregnancy did not change the risk for allergy to these foods in their children, nor was there any relationship to eczema risk.

Allergy to eggs is extremely common in young children, occurring as often as 1 in 20. Fortunately, as many as 80% of children will “grow out” of this allergy. Nonetheless, the study found that when pregnant women took a fish oil capsule each day from 20 weeks pregnant through the first 3 to 4 months of breastfeeding, their child experienced an approximately 30% reduction in risk for egg allergy.

In commenting on this data, the lead author of the study, Dr. Robert Boyle from the department of medicine at Imperial College London explained:

Food allergies and eczema in children are a growing problem across the world. Although there has been a suggestion that what a woman eats during pregnancy may affect her babies risk for developing allergies or eczema, until now there has never been such a comprehensive analysis of the data… Our research suggests probiotic and fish oil supplements may reduce a child’s risk of developing an allergic condition, and these findings need to be considered when guidelines for pregnant women are updated.

Fish oil has long been recognized as playing an important role in brain development, likely because of its DHA content. DHA, like EPA, has important immune regulation activity, and this might well explain the relationship to reduced risk for egg allergy in this study.

The gut bacteria similarly play a critical role in regulating the immune system, and so it is not a huge surprise to see this dramatic relationship between probiotics and reduced risk for things like eczema.

To learn more about recommendations to consider during pregnancy, visit our dedicated Pregnancy Focus Area here on the site.