The LUV Diet vs. the Ketogenic Diet—You Can Have It Both Ways

The LUV Diet vs. the Ketogenic Diet—You Can Have It Both Ways 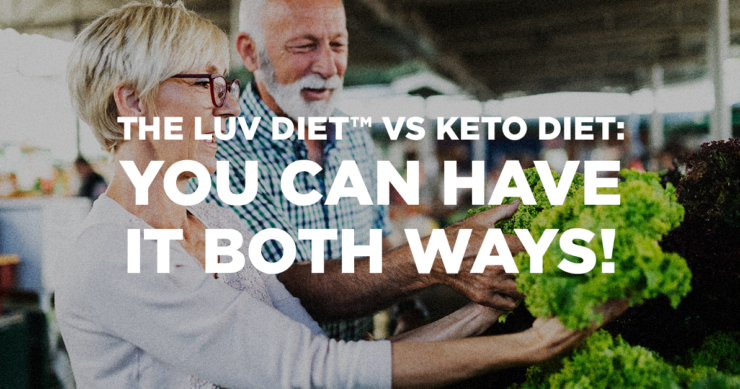 One of the most exciting trends over the past decade in the nutrition world has been the recognition of the value of ketosis. Typically, getting into ketosis, meaning that the body has shifted away from burning carbohydrates for energy and instead relies on fats (ketones) to a significant degree, requires a dramatic reduction in carbohydrate consumption with a corresponding increase in the consumption of dietary fat. Fasting, whereby calories from all the macronutrients are virtually eliminated, is another path to achieving ketosis whereby the body utilizes its own fat resources as a caloric fuel.

I have written extensively on the benefits of the ketogenic diet. And to be sure, there are many. Much of the benefit is derived from the positive effects this diet has on metabolism with favorable changes in how the body responds to the hormone insulin. The ketogenic diet helps restore insulin sensitivity, and this is a huge metabolic plus when it comes to helping control blood sugar, a fundamental goal for health and disease resistance.

So the question presents itself: how do these two diets relate to each other? And the answer is straightforward. These diets are not mutually exclusive by any means. Both are valuable and provide us with exceptional metabolic advantages.

The best ketogenic diet is one that is careful to include fiber. And that, by definition, means carbohydrate. But the carbohydrates found in fiber-rich vegetables don’t preclude getting into ketosis. And it’s the inclusion of these fiber rich, colorful vegetables in the ketogenic diet that is shared with The LUV DietTM, (LUV meaning “lower uric values”). The ketogenic diet in fact can be implemented from a purely vegetarian perspective, although often various animal products are included. It is here where there is a bit of difference between the two diets in that The LUV DietTM   limits meat and fish in terms of quantity to some degree as they are high in purines, the breakdown products from DNA and RNA. Purines go on to form uric acid and thus can contribute to uric acid elevation. Organ meats are particularly high in purines and are fundamentally excluded from The LUV DietTM.

By far the biggest contributor to uric acid formation is the sugar fructose, so pervasive in the diet of modern humans. As such, its exclusion is central to The LUV DietTM, as one would expect, and obviously to a ketogenic diet as well.

Importantly, keep in mind that research does show that being in the ketogenic state is actually associated with an increase of uric acid. This is most commonly observed when ketosis is achieved by fasting because the catabolism (breakdown for fuel) of muscle liberates purines. Fortunately, this is transient. The good news is that cycling in and out of ketosis actually helps with lowering uric acid and as such, is an important recommendation.

You can learn more The LUV DietTM in Drop Acid.