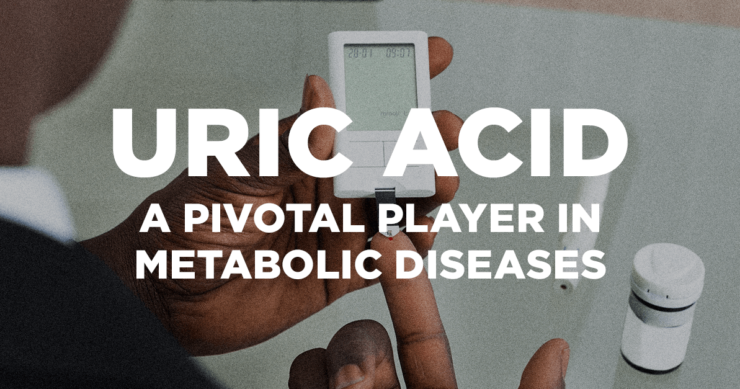 We are now at the dawn of a new age as it relates to our understanding of important chronic diseases like metabolic syndrome, hypertension, type 2 diabetes, obesity, and non-alcoholic fatty liver disease. It is now clear that uric acid, previously just considered to be a waste product of metabolism, is playing a central role mechanistically in these pervasive problems.

In a recent review published in the European Journal of Internal Medicine entitled Uric Acid in metabolic syndrome: From an innocent bystander to a central player, scientists explored how uric acid plays a fundamental role, signaling the body to make and store fat, increase its blood pressure, and enhance glucose production. We all carry this type of physiology as a legacy of our primate ancestors for whom making and storing fat, for example, proved to be a survival mechanism during times of food scarcity.

Uric acid is produced as a byproduct of fructose as well as purine metabolism. And it is here where uric acid acts as a signaling mechanism for increased fat production. For those who want to know the specifics, the degradation of fructose and purines enhances the activity of a specific enzyme, adenosine monophosphate deaminase (AMPD). It is the activation of this enzyme specifically that increases fat storage and insulin resistance. The other pathway through which AMP can be degraded uses an enzyme, AMP kinase, or AMPK. Activation of AMPK actually leads to fat degradation, reduces insulin resistance, and decreases the production of glucose. This is how the common drug metformin works as a treatment for type 2 diabetes. The product of AMPD is uric acid, and it is uric acid that then goes on to further activate this whole biochemical pathway favoring AMPD while shutting down AMPK, and this encourages the body to make fat, produce glucose, and enhances insulin resistance. So, we now see how uric acid plays such a central role in these important events that threaten human health when we consider all of the things associated with obesity and insulin resistance, as well as elevated blood glucose, like coronary heart disease, renal disease, cancer, and even Alzheimer’s disease.

To be sure, this is very new science. Until recently, uric acid was only considered to be worrisome in the context of either kidney stones or gout. But, as is so often the case, nature is thrifty – multi-purposing various components of our physiology.

Having an elevation of uric acid predicts having high blood pressure, and in fact new research demonstrates both in laboratory animals as well as in humans that lowering uric acid with a drug, allopurinol, has resulted in lowering of blood pressure.

The relationship of elevated uric acid to diabetes has been described since the 1800s. There are multiple mechanisms that have been invoked including the development of insulin resistance as described above. In addition, uric acid compromises the function of nitric oxide (NO). NO plays an important role in allowing blood vessels to relax, which may also relate uric acid to high blood pressure. In addition, compromised function of NO reduces the ability of insulin to do its job by reducing insulin’s ability to get through the walls of blood vessels, as well as reducing its ability to make its way into muscle cells where it is needed to convert glucose into its storage form, glycogen.

So, as these authors point out, it’s time we put uric acid on center stage as it is playing such an important role in challenging our ability to remain healthy. And as we recognize that uric acid is the direct downstream product of fructose metabolism, it should come as no surprise that over the past century, uric acid levels have been rising in lockstep with our ever-increasing consumption of fructose, especially more recently with the widespread addition of high fructose corn syrup to so many of our foods.

Introducing: Drop Acid
The LUV Diet vs. the Ketogenic Diet—You Can Have It Both Ways
Uric Acid Affects COVID-19 Outcome